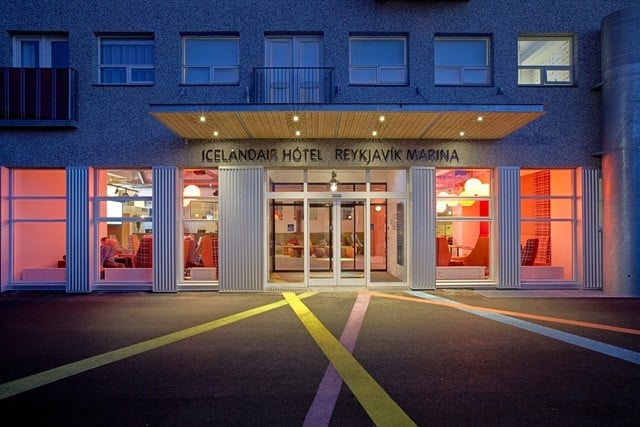 For as long as I can remember Iceland had been on my bucket list. Mr Bbed had only ever been 50% sold as he prefers warmer climes but as it was our 25th wedding anniversary coming up in March I finally managed to persuade him we should go. Actually, I tell a lie it was Rick Stein who persuaded him when we watched his ‘Long Weekends’ series on BBC2 earlier in the year.He even decided to to track down Rick’s actual hotel ‘Icelandair Reykjavik Marina Hotel’ on Expedia and I certainly wasn’t complaining as on the show it looked sooo cool.

From the outside when you arrive the hotel doesn’t wow. Everything looks very industrial. I found out during our stay that the hotel was a converted paint factory and that actually many of Reykjavik’s buildings are fairly unassuming. They save the wows for when you step inside. Just look at the quirky lobby below. The firepit was a warm welcome! There was just always this one guy hogging it, though! This was our room. I think it would be best described as perfectly formed. We had a marina view which was what my husband asked for. I was just a tad put out that they didn’t upgrade us especially when they knew it was our 25th wedding anniversary. Our eldest son had emailed ahead and ordered us a bottle of fizz for on the day. The only thing we didn’t enjoy was the frosted glass between the bed and the bathroom. Now I know we’ve been married a long time and there’s not much we don’t know about each other or have shared but I leave one word here — privacy.

There are some things we all like to keep private aren’t there? I think you will know what I mean! Maybe it’s the Brit gene in us but only a frosty glass panel between mine and my other half’s daily ablutions ( his word not mine) is just a step too far.

I also didn’t like the fact that we had two single beds joined together but this was a very small niggle. After all — look at this view across the historic marina. We could even see one of Iceland’s greatest, cultural, man made landmarks — Harpa. The day we arrived, our hotel was full of visitors all dressed up to attend the event that would choose Iceland’s entry for 2017’s Eurovision Song Contest. Everywhere you turn in this hotel there are corners just crying out to be instagrammed. Mr BBed and I both agreed that on the quirkiness level it was the Icelandic version of our visit to Tigerlily Edinburgh which you can read about here. We opted for the breakfast option to be included in our stay. We already knew ahead how expensive Iceland was so figured to include it was always going to be a wise move. We weren’t disappointed. The choice was buffet style and was available 7-10am each morning. I’ve got to tell you that we wouldn’t have missed breakfast for the world after sampling it on our first morning. Piping hot and delicious. There were some choices that weren’t my style such as tuna salad but hey each to their own. The crispy bacon, the bread and the Skyr yoghurt with fresh blueberries — oh yes. What usually spoils hotel breakfasts for me is the stewed, luke warm coffee. Not so here — piping hot Honduran — every single morning — it was perfect. We took way longer over breakfast than we have done on many vacations. This really did set us up for the day. Check out the morning that we were presented with smashed avocado and tomatoes on sour dough toast served alongside a fresh ginger and beetroot health shot. Sublime! Here he is again … So many pretty spots to hang out and of course take a shot of! We loved our stay at The Reykjavik Marina Hotel. It was just what we hoped it would be. There are currently just eight hotels in the chain. I love the look of the one in Vik. We attempted to visit the black sands that the town is famous for but bad weather on the day put paid to this unfortunately. Next time, maybe. I’ve got lots more to share about our Iceland trip including some top tips very soon so make sure you subscribe so you don’t miss out!  xoxo