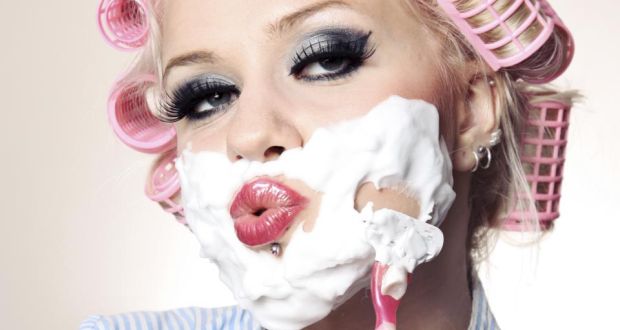 My facial hair has been changing for a while. I haven’t grown a beard or a ‘stache. It’s something a bit more subtle than that but not to me. Here’s why I decided to shave my face.

You know that blonde peachy fuzz that we all have?

At least I think we all have it. My babies had it and boy was it cute on them. When they were babies! Some people have it on their face or their forearms or up from their navel or inner thighs. Mostly it never bothered me. I never really had much of it to speak of anywhere on my body. That is until I noticed it becoming ‘more’ on my right cheek. My face that is — not my butt!

I don’t even know when it started to ‘be’ more. Occasionally I would catch a glimpse of myself in a mirror when I was cold and I thought side on I was beginning to bear resemblance to a dandelion! I decided to do some research to see if it was safe to shave it or remove it and that I wouldn’t end up like a bearded lady and be carted off when the circus came to town. Hey! I’m not dissing any ladies here who want to be bearded. I’m all about choices here in Bbed.

Turns out ‘female shaving’ is a thing and it’s not restricted to age. Like many things some women have it more than others. I think mine came thick and fast ( ha! see what I did there? I’m punning!) when I stopped taking HRT recently – ( another story coming up soon about that one).

There’s even a whole beauty trend because of it called ‘dermaplaning‘ which is the clinical name for shaving. Removing the hair with a super sharp, sterile blade. Not for the faint hearted, eh? Bonus point is not only are you getting rid of unwanted hair but the action of removal acts as an exfoliation of the skin.

As for the old wives’ tale that your hair will grow back thicker, faster and darker turns out facial hair is vellus hair which isn’t the same as the hair on the rest of our bodies.

Okay — so I was happy with the actual science bit but what about actually freakin’ doing it?

A little more research as well as chatting with some of my Insta friends and it turns out that there are various tools you can buy to DIY at home. I chose to try the instrument with the most unfortunate name — a ‘Tinkle’. How does anyone come up with a brand name like that for removing female facial hair? I paid £1.99 from Amazon. They are described as eyebrow razors but the small print on the packaging states they are suitable for fuzzy sideburns like mine! The low cost didn’t seem to relate to the enormous decision of actually doing the deed if you know what I mean.

Turns out they are a pretty blunt instrument and nothing to be frightened of.

I enlisted the help of my eldest son who was about. Due to the bluntness of the product I felt if I scraped too much I would make myself sore. Much easier for someone else to do it especially when it’s at the very side of your face like mine. The fuzz came off like that dandelion above!

This is my right cheek before ….. Not the best photos I agree but good enough to tell the difference.

Afterwards, I applied some of my son’s aftershave balm!

It felt tingling but this wore off quite quickly. I was half expecting to wake up to razor burn but I am relieved to say it was as smooth as well you know.

As there are three Tinkles in the pack I thought I could afford  to throw this one away. As I said, they start off quite blunt so it doesn’t take much for them to blunt further.  I’ll use the other two when necessary — I hope not too soon, though. Then I might try and upgrade to something else.