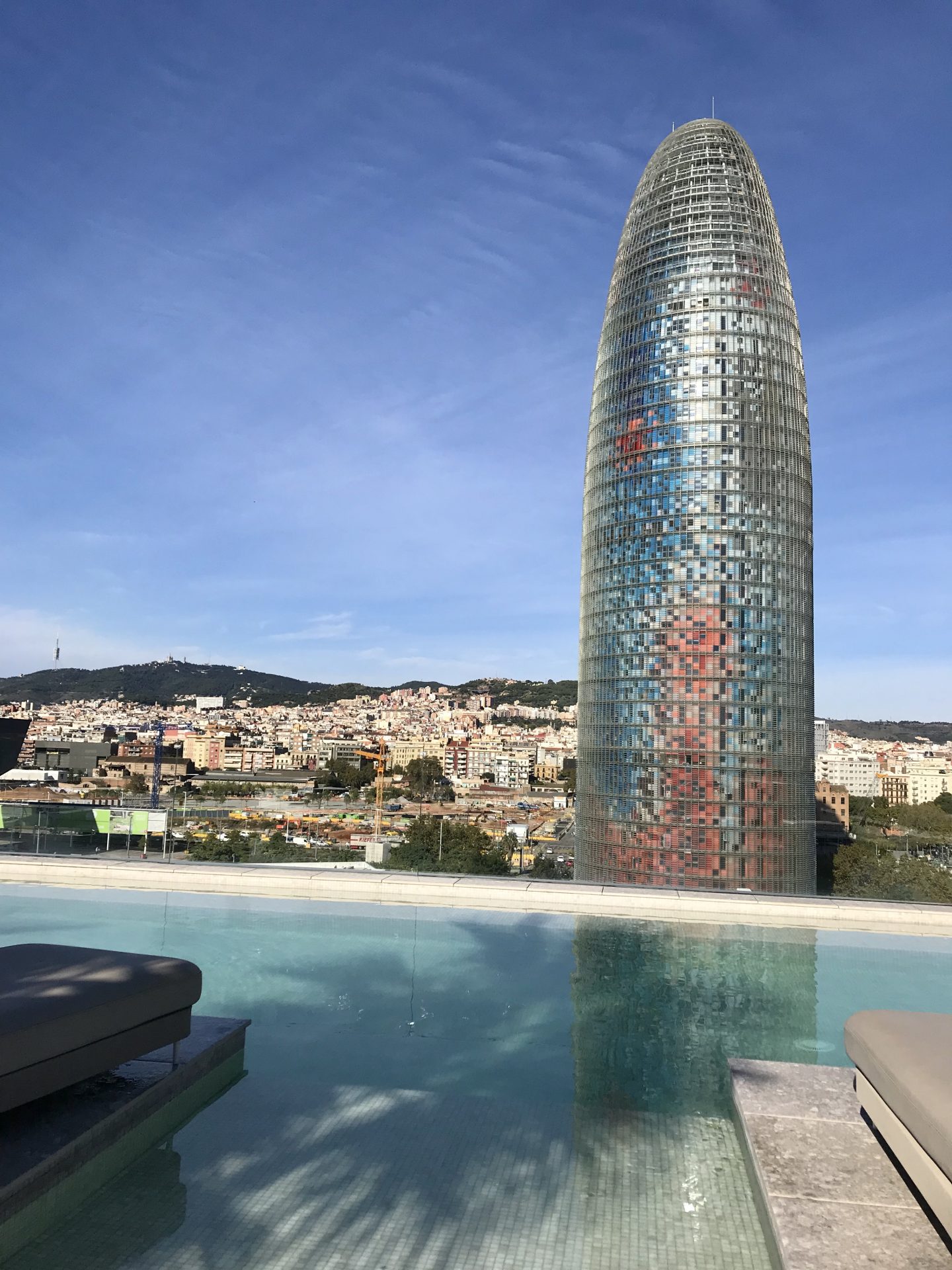 Just like our Iceland trip, once again we booked our Barcelona flights and hotel stay through Expedia. The difference was that this hotel was recommended by my blogger friend, Sam over at SOS Travel. This is a girl who is always off on her travels so I figured it would be a good recommendation.

We travelled by EasyJet from Newcastle directly to Barcelona. We decided to take the train from the airport and see a bit more of the surrounding area. This proved to be a mistake as en route Mr B was robbed. Thankfully, he wasn’t aware { the Barcelona pickpockets} so wasn’t hurt apart from his pride and his wallet being made lighter by 600 euros, his credit card, bank card and his driving licence. He spent the first 4 hours of our trip  at the police station which thankfully was only across the road from the hotel. I unpacked and ordered room service for us when I knew he was on his way back.

I won’t dwell on it. We weren’t prepared to let it dampen our spirits.

As we arrived when it was already dark just after 6pm this was our first view of the outside. Very modern and minimalistic. 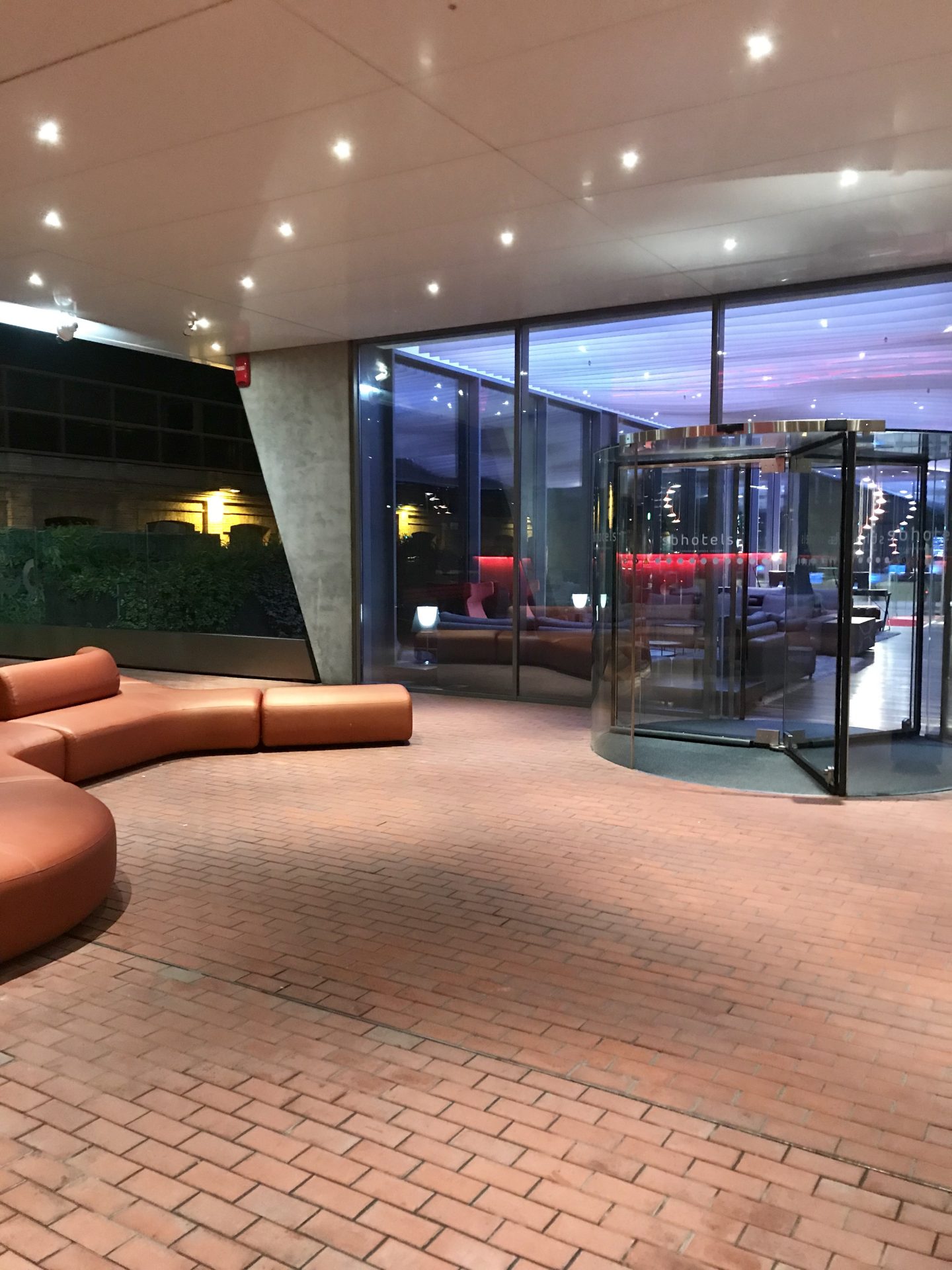 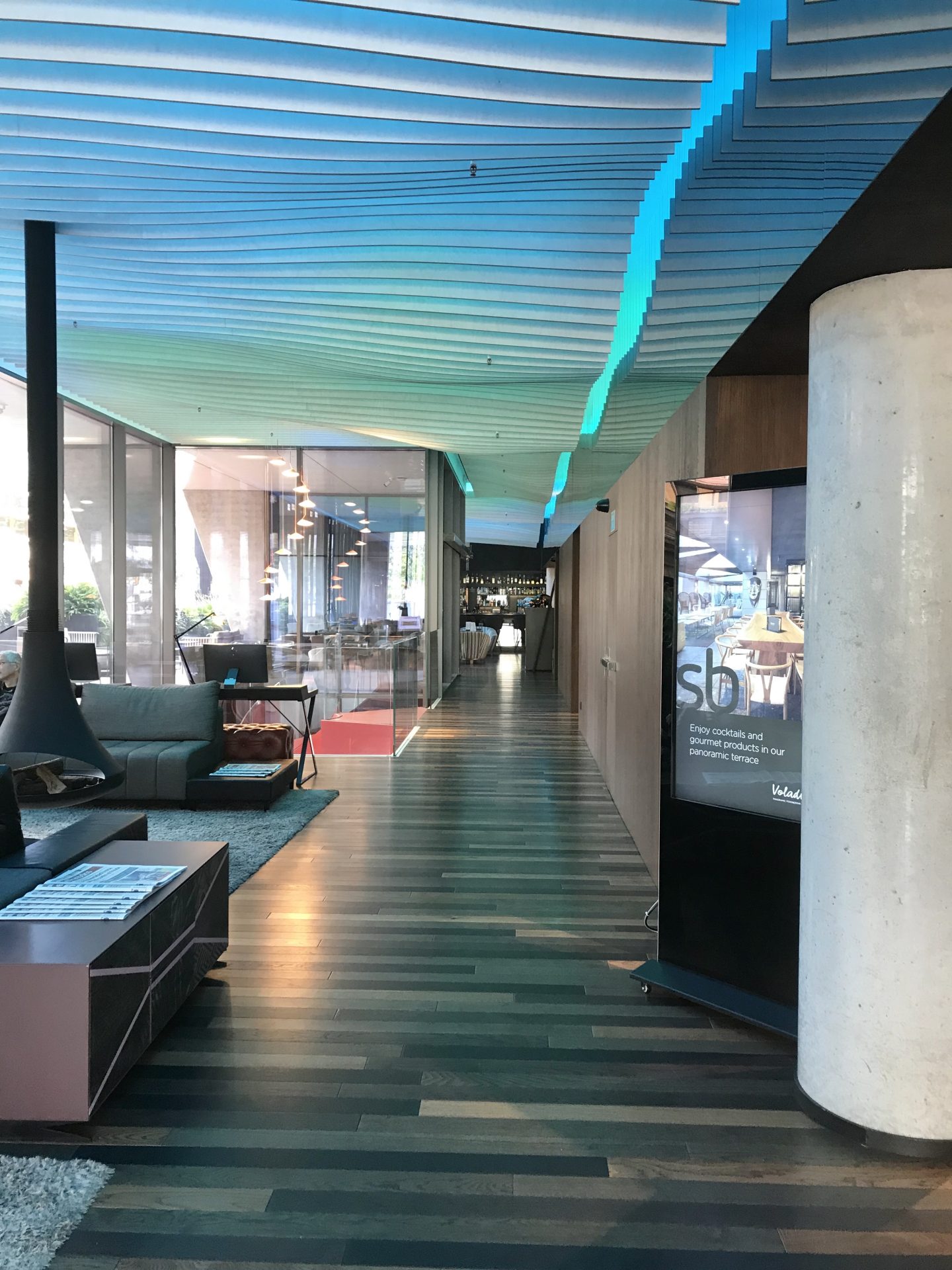 Check out below  what I thought was a selfie light. It wasn’t … damn!!

The rooms were very pared back too but the comfort certainly wasn’t lacking. I usually toss and turn in strange beds because there’s mostly something not quite right. I slept like a log each of the 4 nights we were there. We both did. 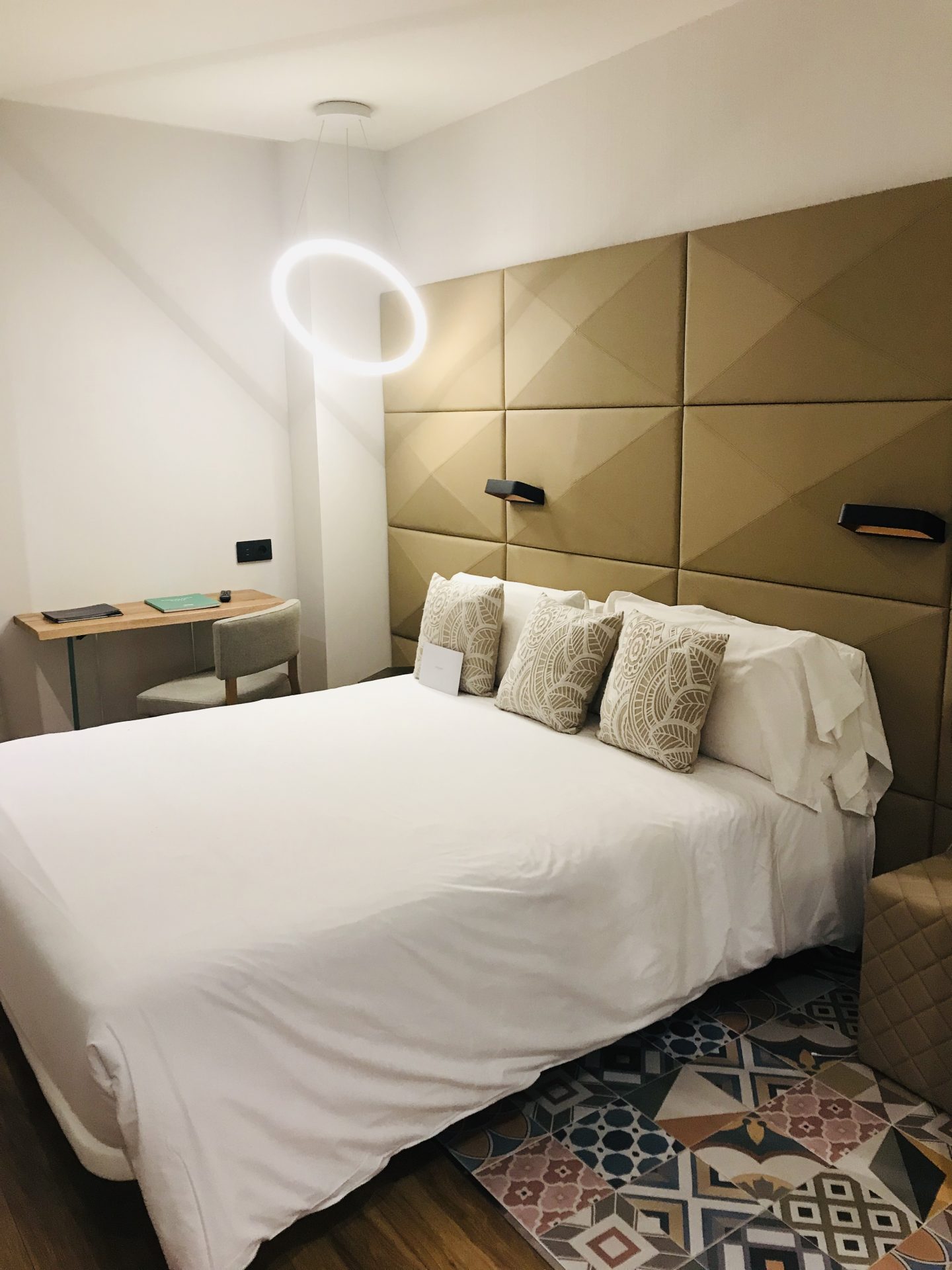 Even a pillow menu. I’ve never been to a hotel with a choice of pillows. I clearly haven’t lived. I don’t know what it is about these frosted panels in hotel bathrooms but it does seem to be a trend. At least this time the sink was separate unlike in our Reykjavik hotel room. Everything was spotless and smelt fresh. I have a thing about towels but I can report that they were plentiful and fluffy. The shelves were stocked with everything we might need. All the usual smellies plus a sewing kit, comb, cotton wool pads. I think a fair bit of attention to detail has been taken. 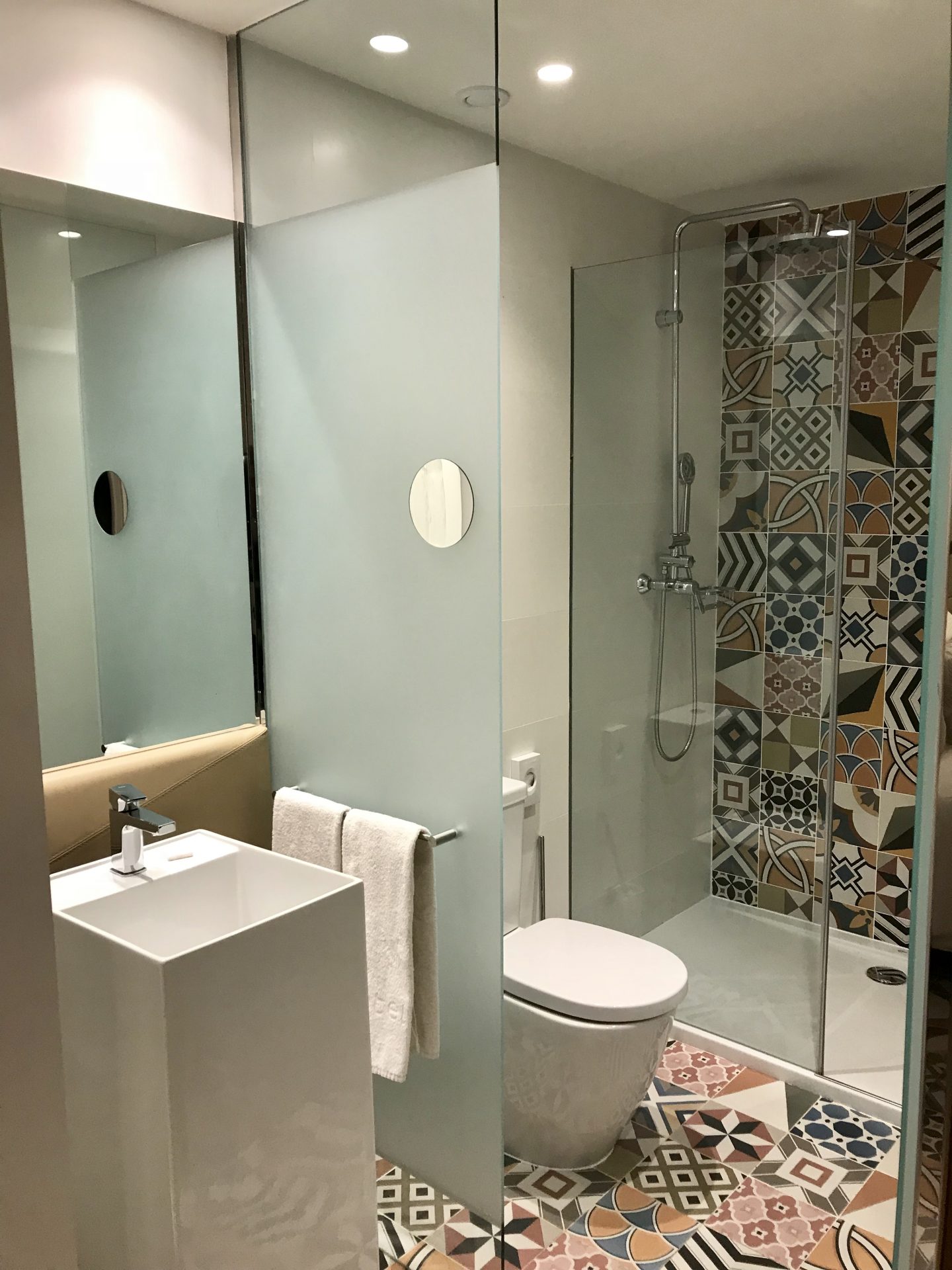 We decided to try the breakfast in the hotel on the first morning. It was buffet style with the usual continental selection but we thought it was quite expensive for what it was … 18 euros each. Other mornings we grabbed brunch wherever we were enroute to. We could get fresh croissants and hot frothy coffee for the two of us for about 6 euros in the endless choice of small kerbside cafés.

There were lots of relaxing spaces to hang out in the hotel. Perfect for a beer or yet another coffee when we returned back each evening. One of the things the hotel is known well for is the scenic back drop from its stylish roof top. This was a place we very quickly fell in love with. A great place to kick off your shoes and chill when you’ve had a busy day sight seeing.

The torpedo shaped building right next door that you see in everyone’s photos is called the Torre Glòries. It’s a beauty to behold and changes colour at night time. Apparently at certain times of the year like Christmas and New Year the colours are highlighted with animation sequences. This area where the hotel is situated forms the gateway to what is known as the digital and technology hub of the city. It has rapidly become a symbol of new Barcelona. There is also an enormous shopping and leisure complex about 3 minutes walk from the hotel called Glories. Just around the other side almost Torre Glòries. We shopped there. A little purchase of a fab leopard print scarf and earrings for me in Stradivarius. I couldn’t resist. We also ate pizza in an Italian restaurant that had a queue of locals out side of the door.

When in Spain …. eat pizza!

There is a very large Carrefour supermarket here too so perfect if you are self catering in a Airbnb. Oh and the hotel is also situated about a 25 minute walk down one straight road to the beach which we did on our first day. Lovely walk, lovely day. We had mojitos on the sea front. I mentioned earlier that we got the train from the airport into the city. It’s really good value at just over 10 Euros. The stop for us was Clot and then we needed to get the Metro to Glòries where the hotel was. This was a perfect base for getting into the city each day. It was only about 4 stops to the main centre. The ticket we bought at the train station was called a T10 ticket and allowed us unlimited travel on the Metro all week. I would highly recommend it. Information can be found here.

This was the scene below of our last couple of hours in Barcelona. We spent it up on the roof again watching the Autumn sunset. I had a little snooze as well. It was hard not to. It was so tranquil as we had it mostly to ourselves.

I imagine with the pool and the bar area it is a hive of activity in the warmer months but this suited us fine. 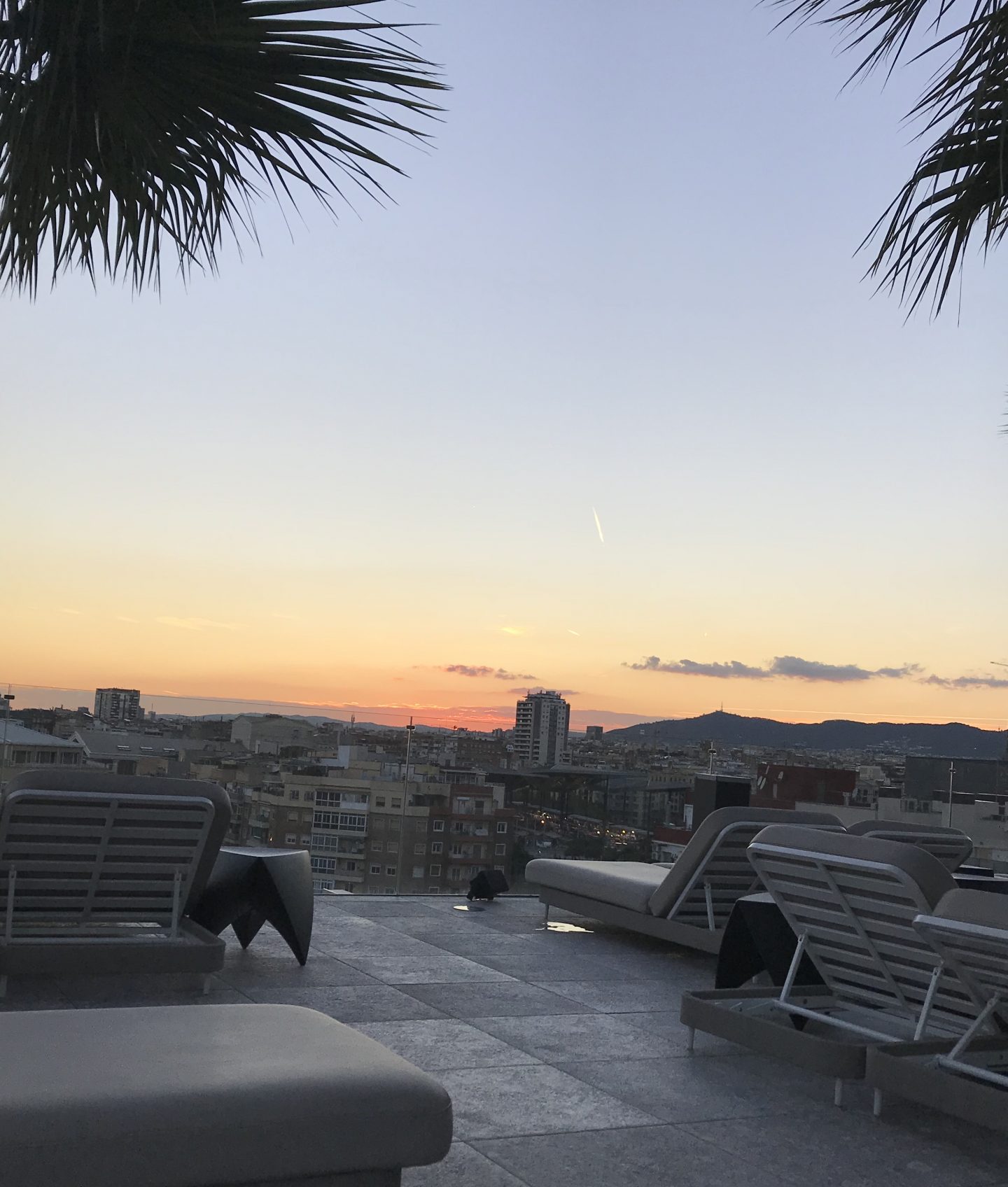 We really enjoyed our stay in SB Glow. We’d read a few Trip Advisor reviews that the staff weren’t very helpful but this wasn’t the case for our experience. We found them all very pleasant and friendly. Especially when we rocked up to reception on arrival and at this point we discovered Mr B’s wallet had gone. They were very sympathetic and helpful and told us where the police station was and what we needed to do.

We had an adventure that’s for sure even if it was a very mixed one!  The hotel we would definitely recommend and revisit.