We didn’t plan ending up in Lincoln on the last Saturday of 2019.

We were heading down to a village in Wisbech, Cambridgeshire for a family funeral on the Friday. As we had never been to this part of the world before we decided as part of our plan to see more of the UK this year {remember my ’10 goals for 2019‘?} we would then travel onto Cambridge and have a weekend seeing the sights.

Life has a way of changing things up though, doesn’t it? We’ve all been ill  Chez BBed since January 2nd with this awful cold bug doing the rounds and it’s really wiped us. So the thought of a 4.5 hour drive back up the country on the Sunday just wasn’t doing it for us.

We wanted to take advantage of being out on the road, though and decided to find what city was on the map on the drive home that we had never visited before. Hey presto! Lincoln.

DO – The main thing we wanted to do was visit Lincoln’s famous cathedral. Did you know it was the tallest building in the world .. yes the world for over 200 years {1311–1548}? Tallest after the Great Pyramids for a while. These are the sorts of snippets of information you can glean when you go on a walking tour of the cathedral  which we did for the modest fee of £8.00 each.

In order to get to the cathedral first though, it’s a very steep walk. So steep that the last part of it is called ‘Steep Hill’. There’s lots to SEE on the way up. Lincoln is steeped { see what I did there? 😉 } in medieval history. There is also a castle. Even before the Normans decided to build here it had been the site of a Roman fortress since 1AD which is mind blowing.

There’s a nice mix of pubs and coffee shops on the way up so you can make the climb up to the cathedral as leisurely as your legs need you to. 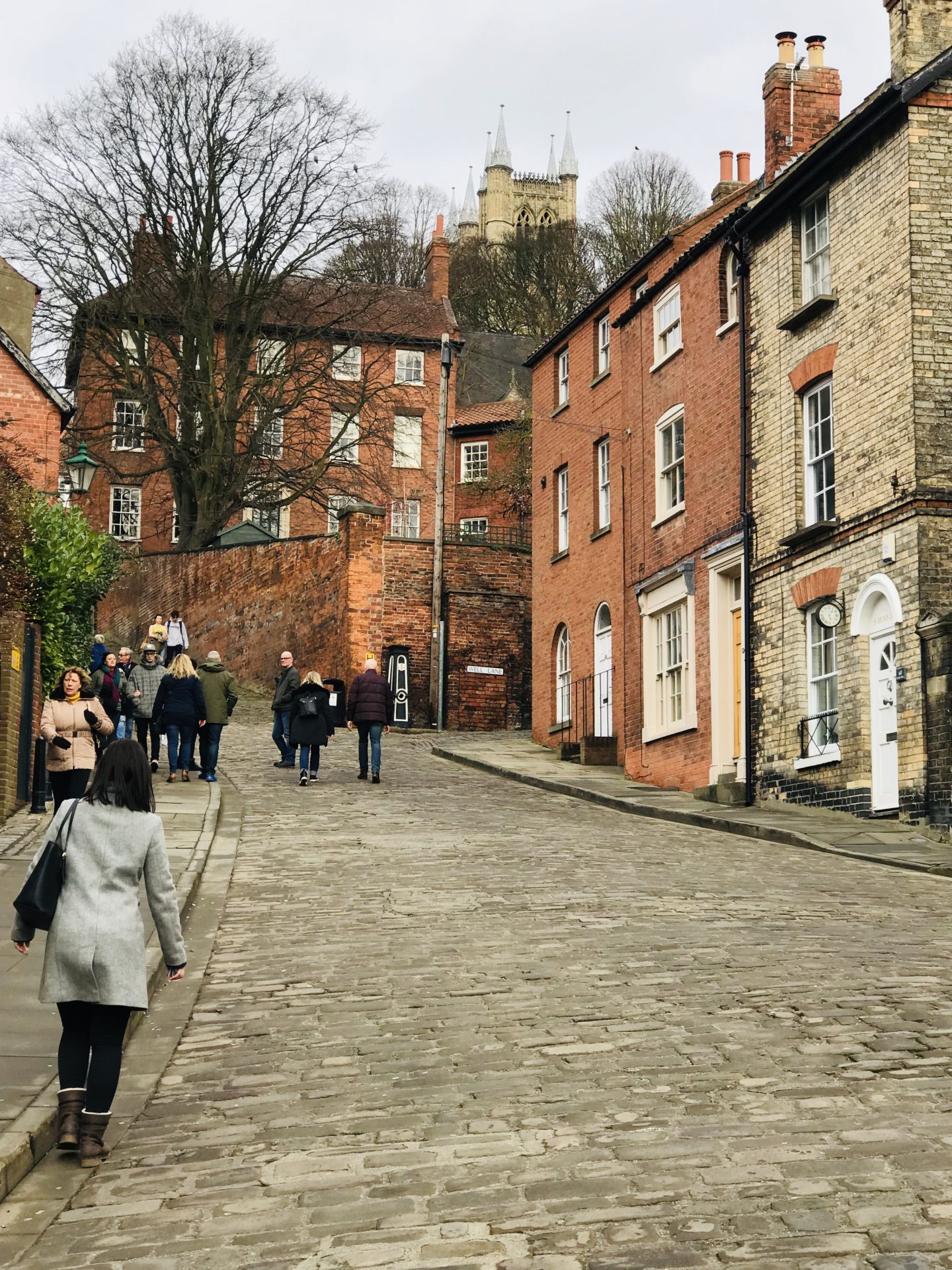 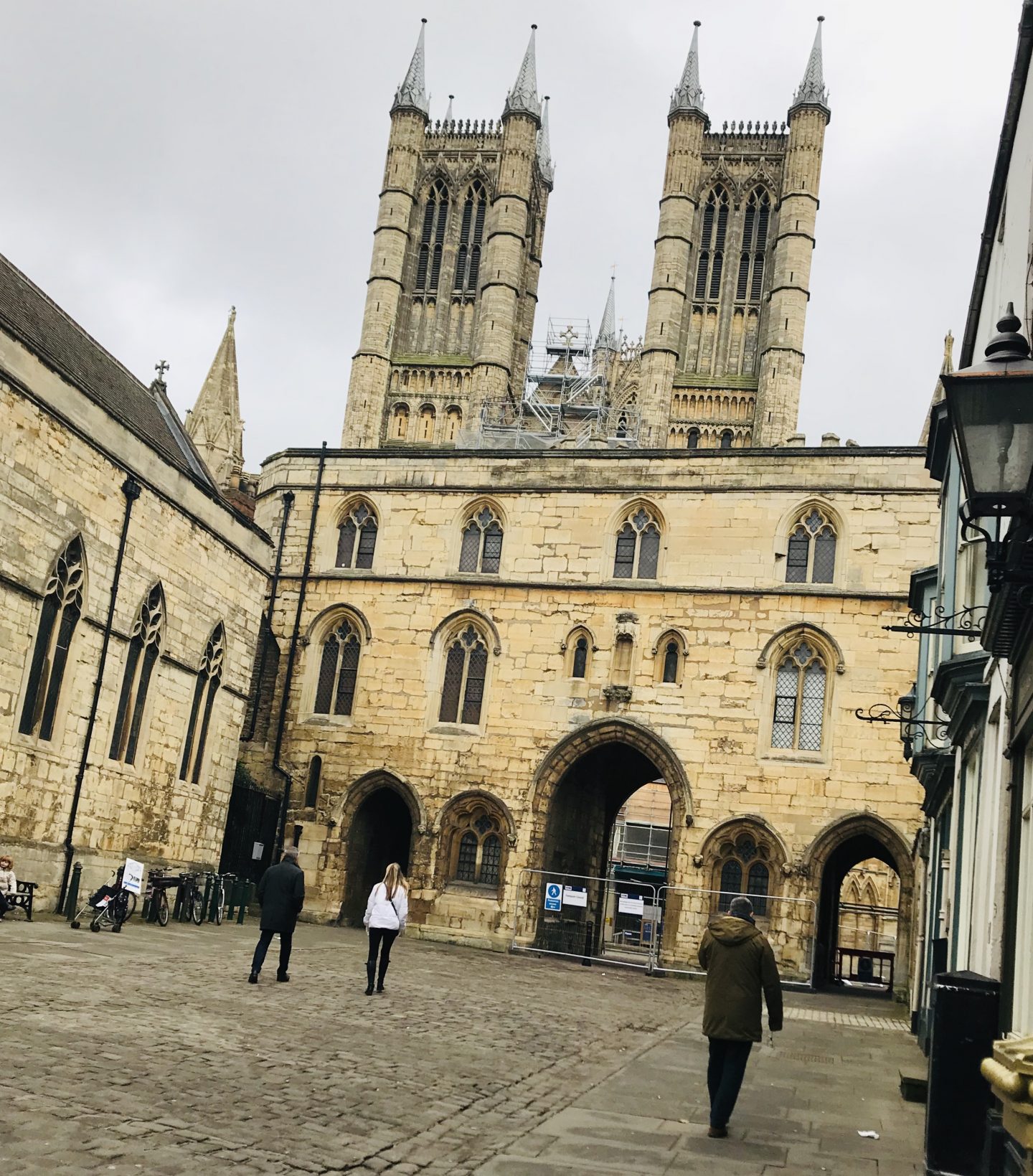 This is a row of beautiful Regency style houses just inside the cathedral walls. It looked very Mary Poppins-esque and I couldn’t resist posing outside No. 20. Those double bay windows were splendid. 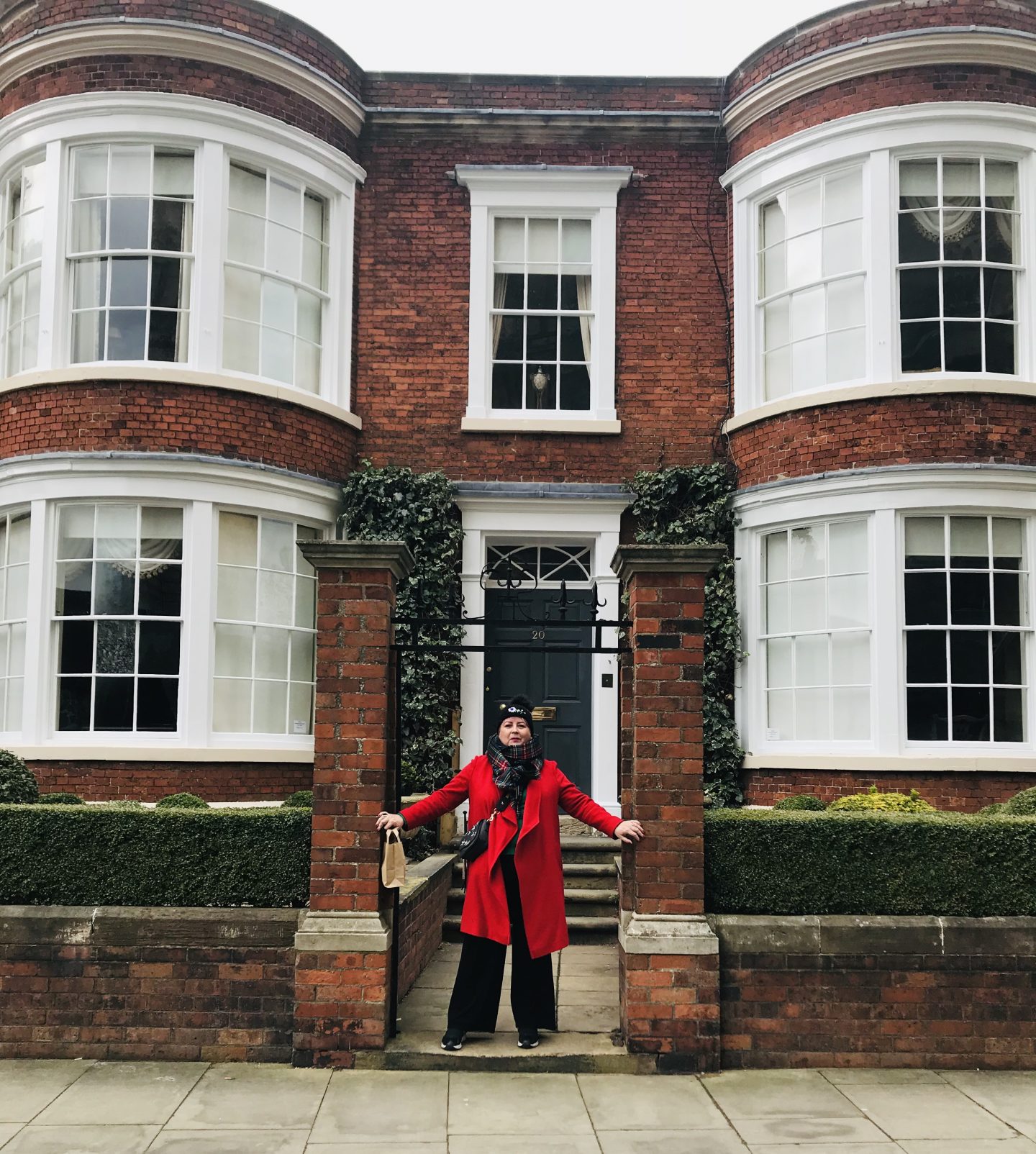 Once inside it’s jaw droppingly majestic. 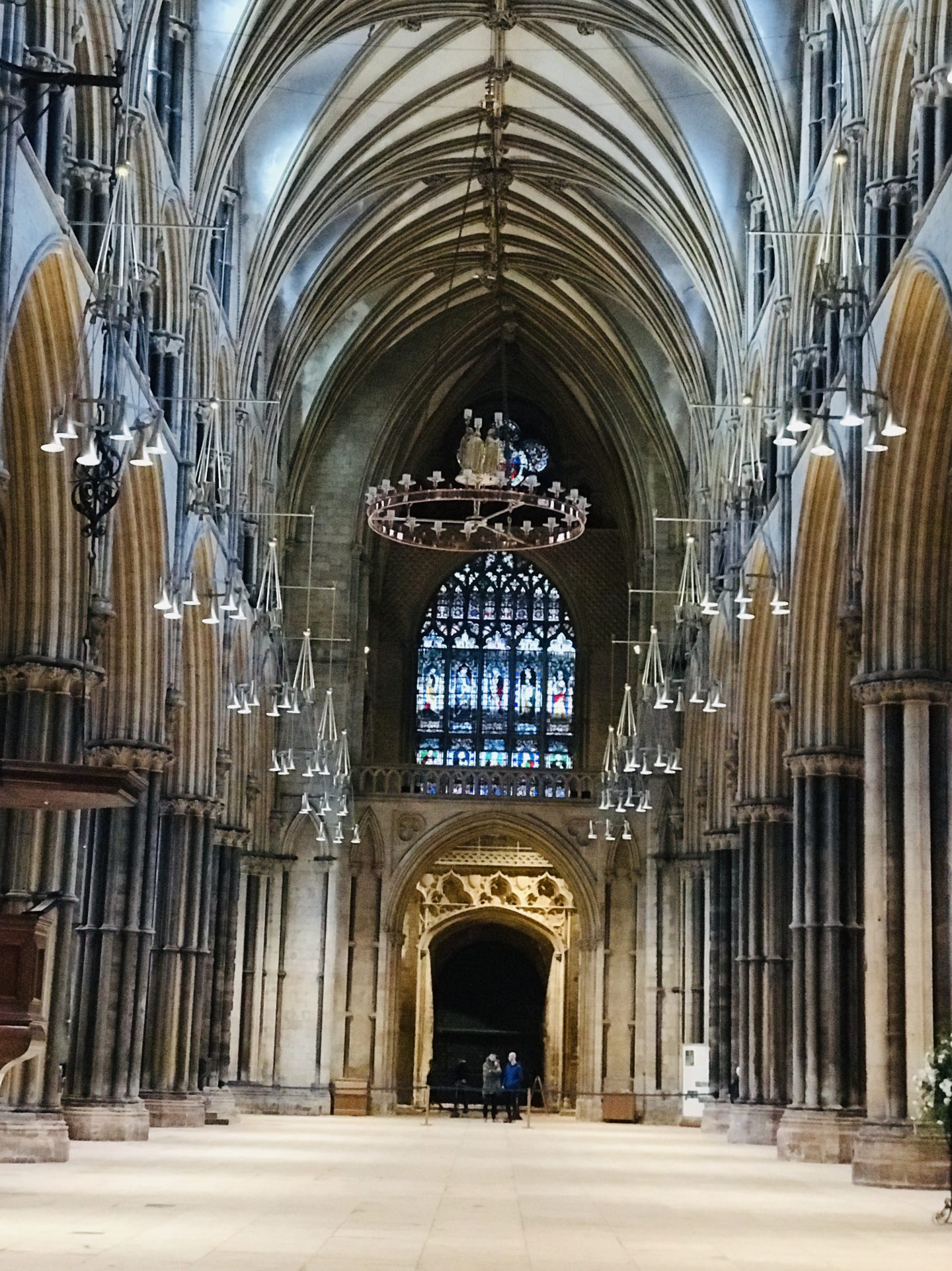 We both love architecture and old buildings. I get lost looking up at things. The stained glass windows are stunning. Most are from the Victorian era sponsored by rich businessmen. Many of the originals were smashed to smithereens or removed and taken away by bad tempered, Henry VIII when he fell out with the Pope over his marriage to Anne Boleyn. Henry was excommunicated and this was the start of the Reformation era when he went on the rampage against everything Catholic. The central image here is known a the ‘Learning Window’ or ‘Boole Window’. It’s dedicated to a very clever man called George Boole. He was a 17th century mathematician and philosopher and is widely known as a forefather of technology for his Boolean logic. Super brainy. A lot of the tech we use even today including our phones are here because of the tech knowledge Boole laid down. Our tour guide told us there are roads in Silicon Valley named after him. How cool? Go George! 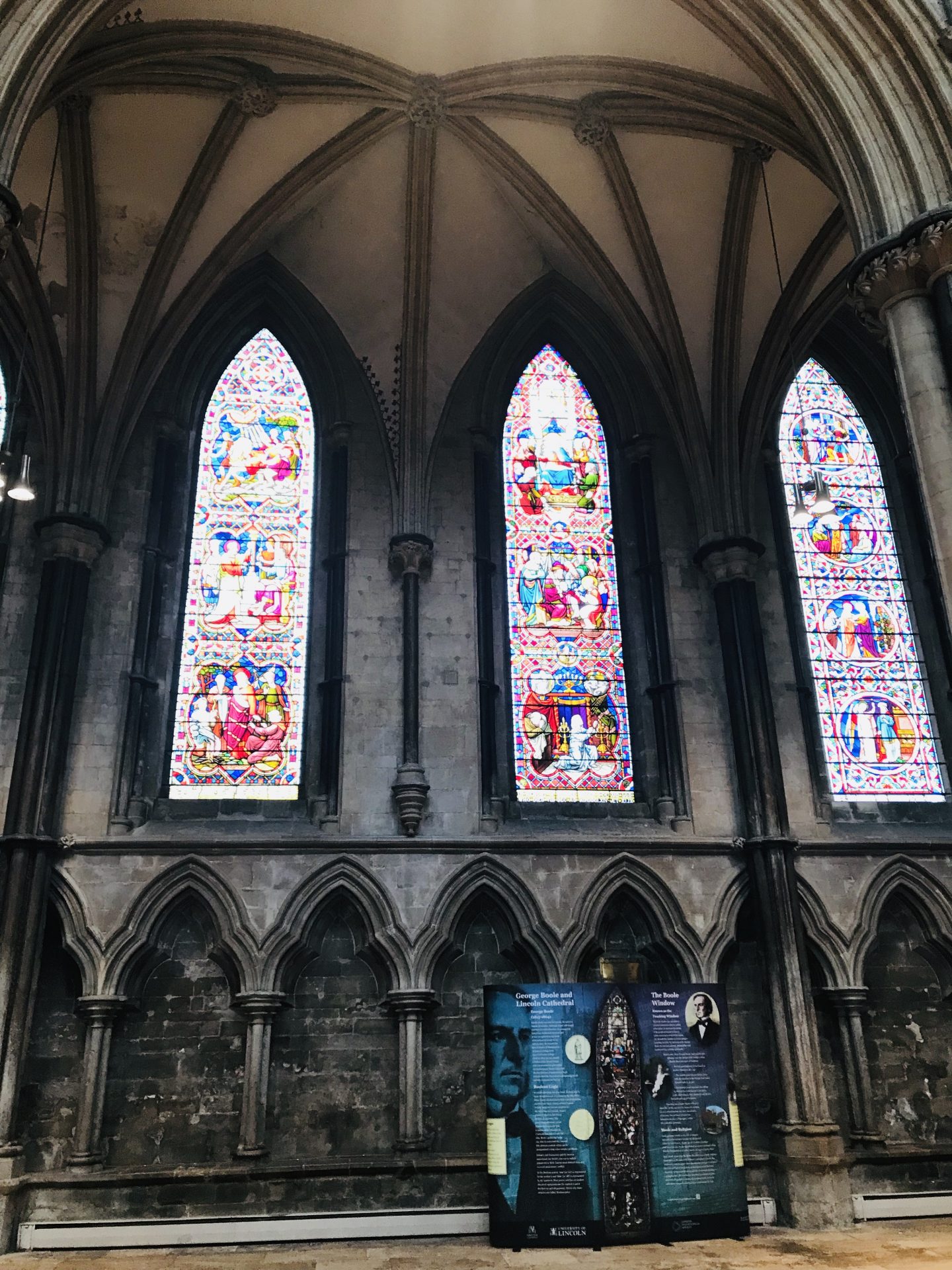 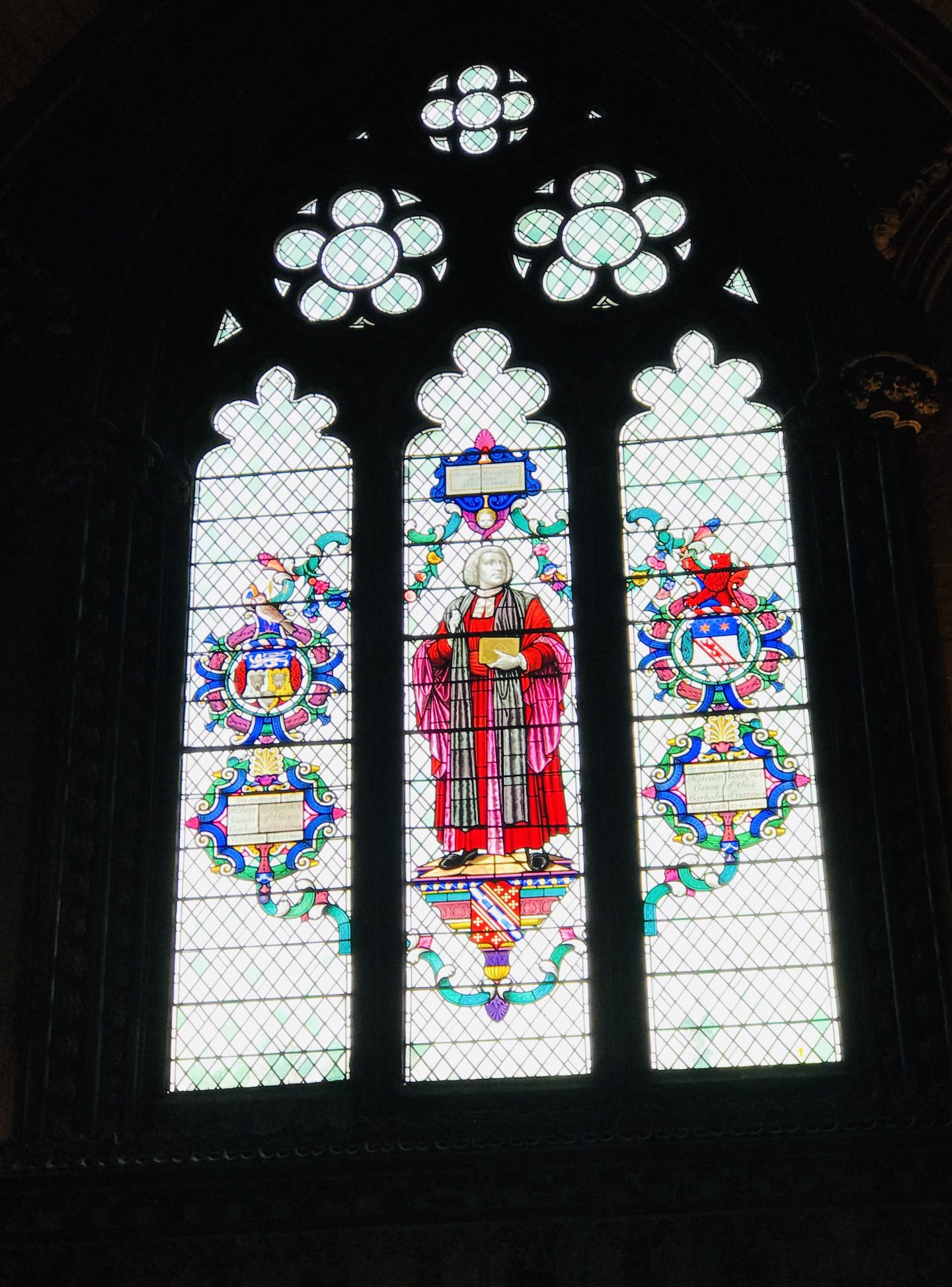 Look at this! The choir area dedicated to Sir Hugh of Lincoln. He was the man responsible for the massive rebuilding of the cathedral as we see it today after the earthquake. An earthquake! In 1185. One of the largest ever recorded for the United Kingdom.

It wouldn’t look out of place in a Harry Potter movie,  would it? 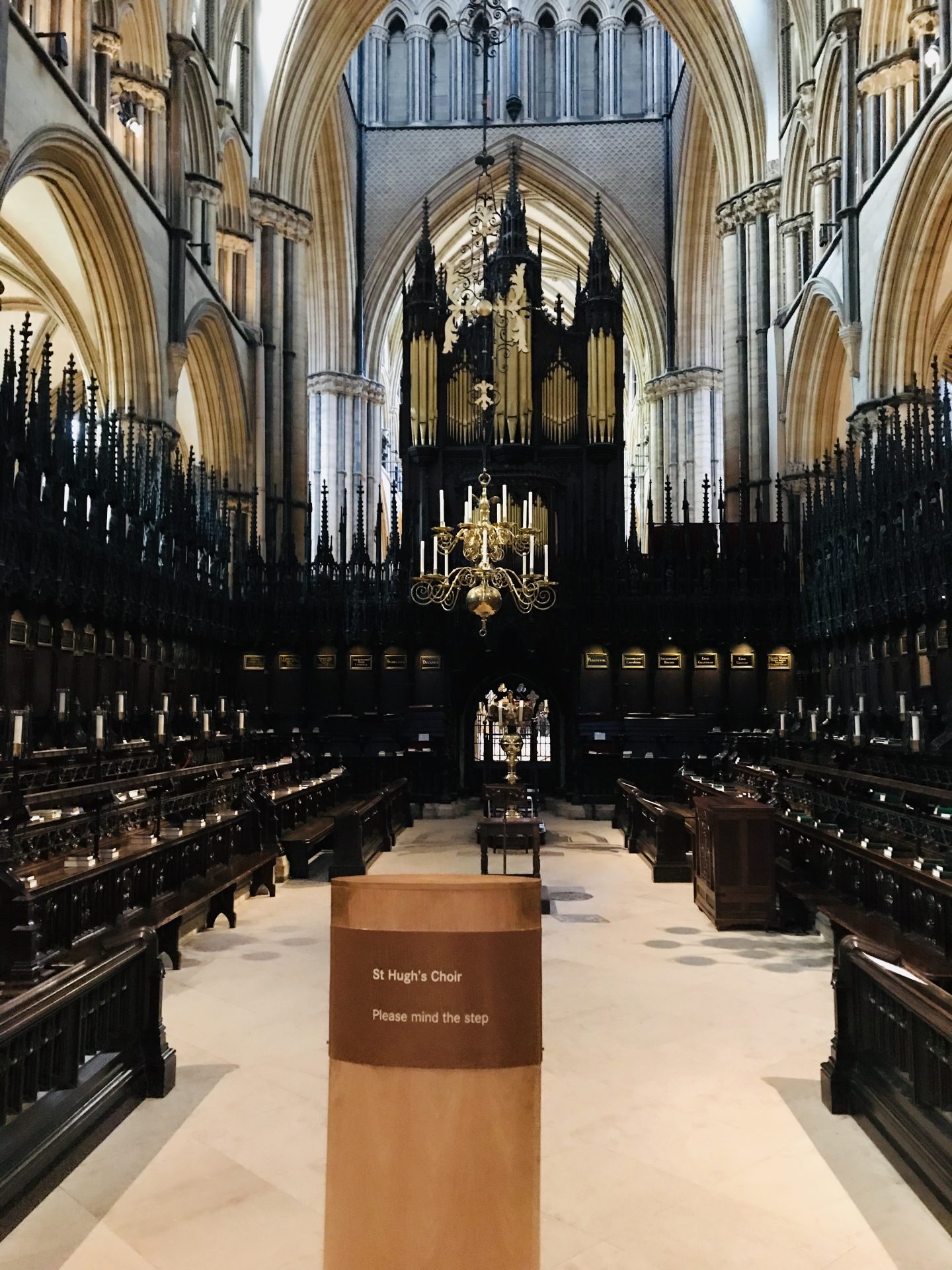 Lincoln is the only place in the world where where you can SEE one of only four surviving copies of the 1215 Magna Carta. Housed in the Castle which unfortunately we did not have time to visit.

Here’s the Magna Carta pub, though, just outside the castle walls. 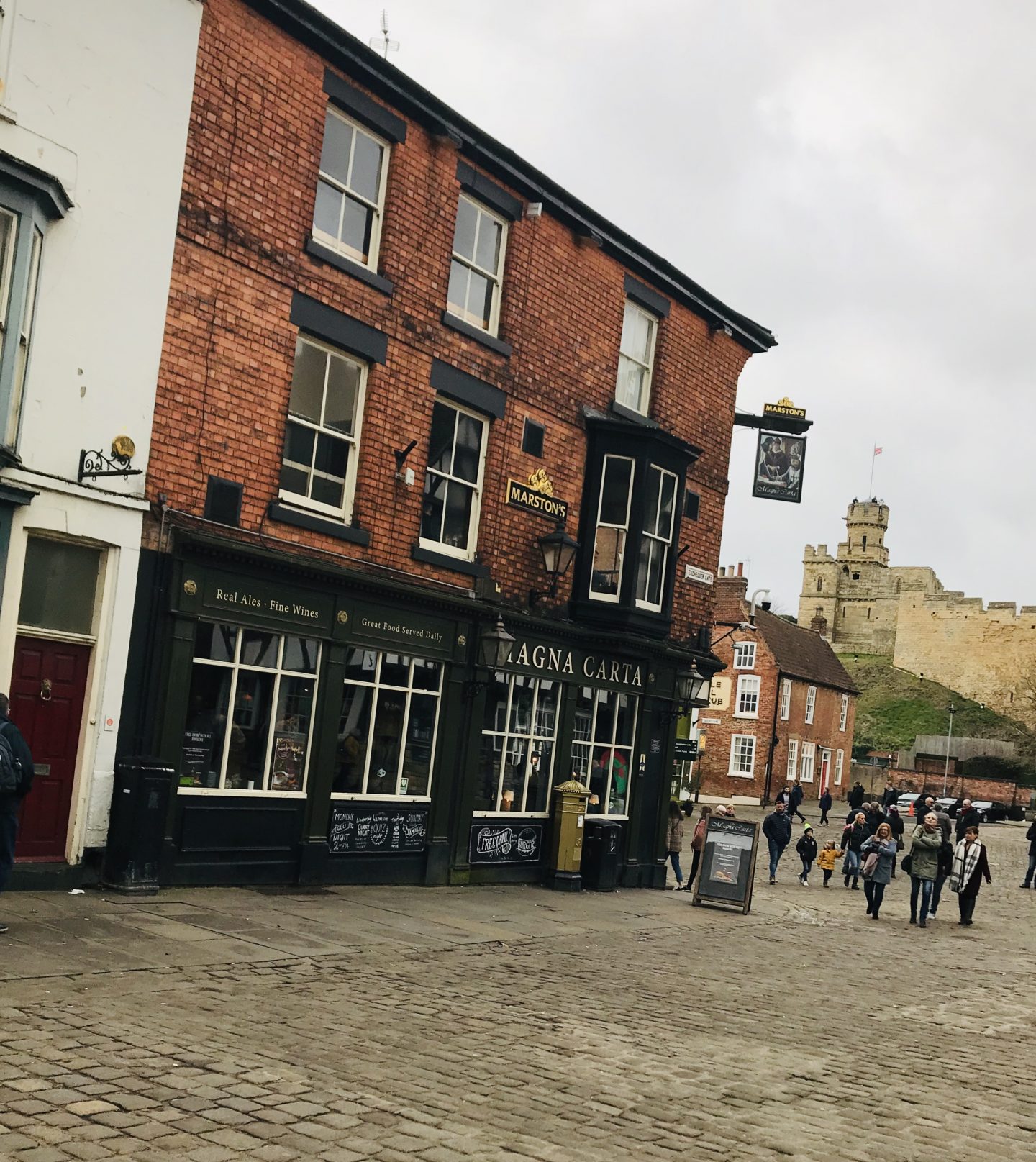 We started the descent back down Steep Hill. Quite testing on the knees but we took our time. 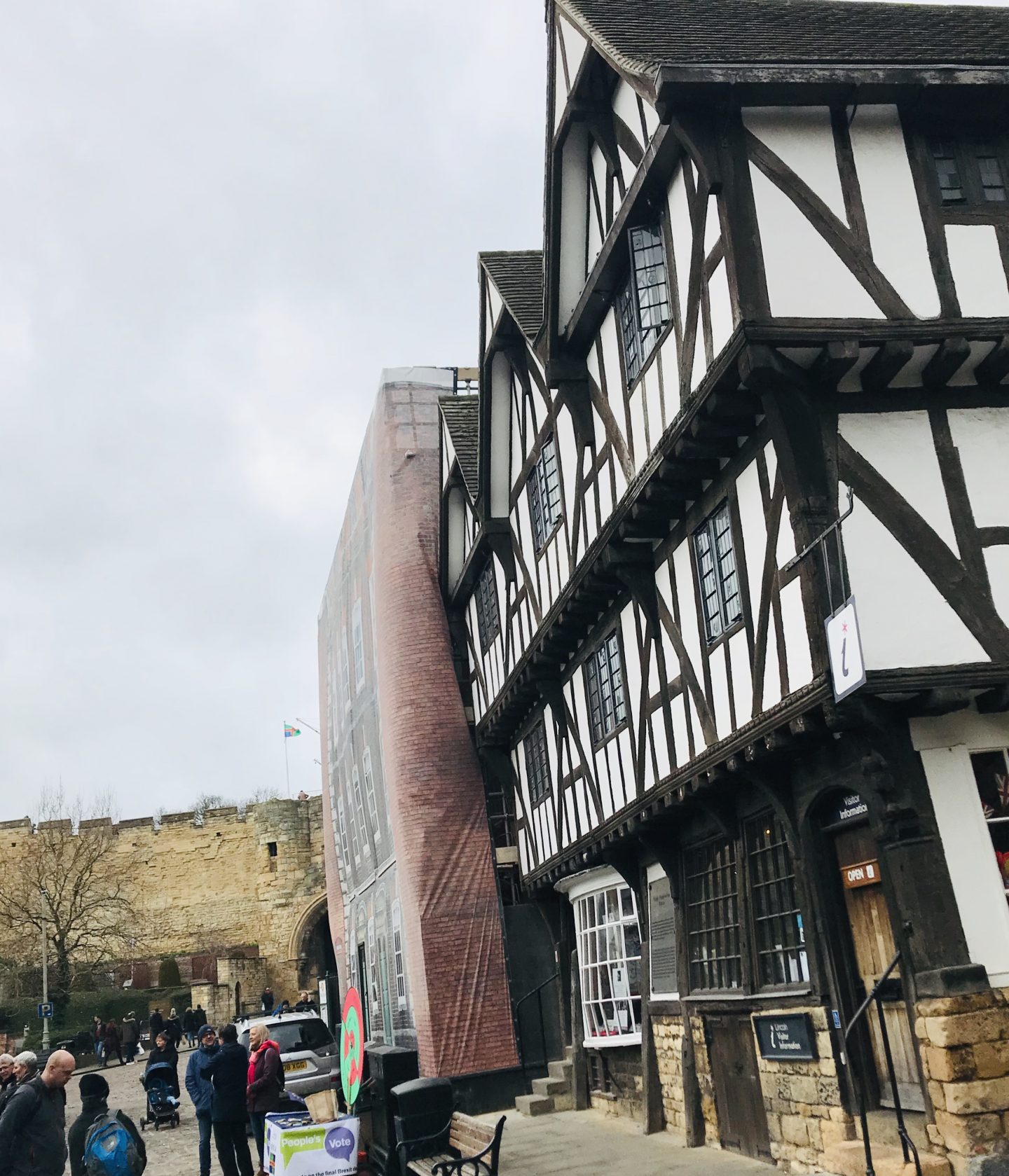 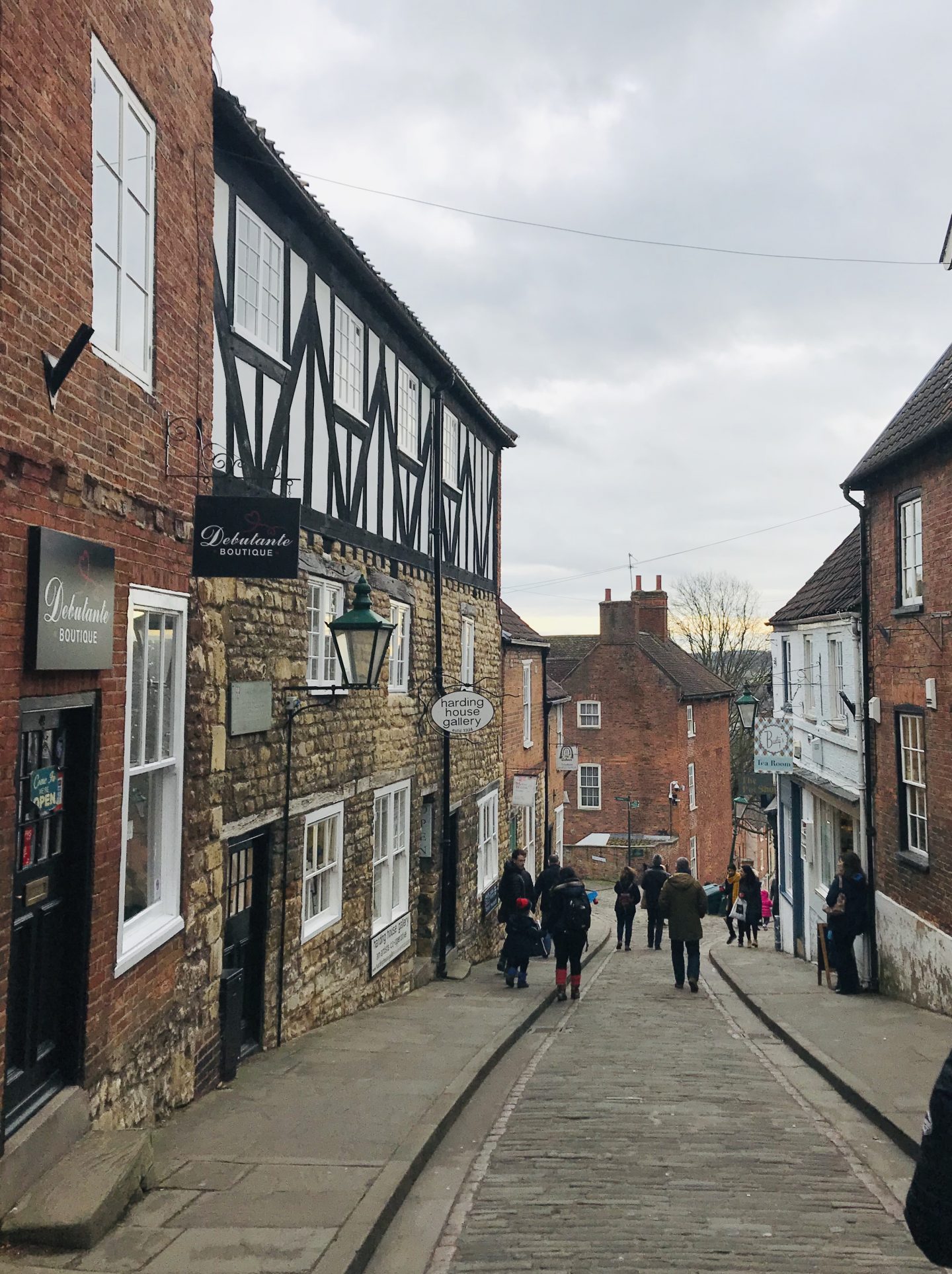 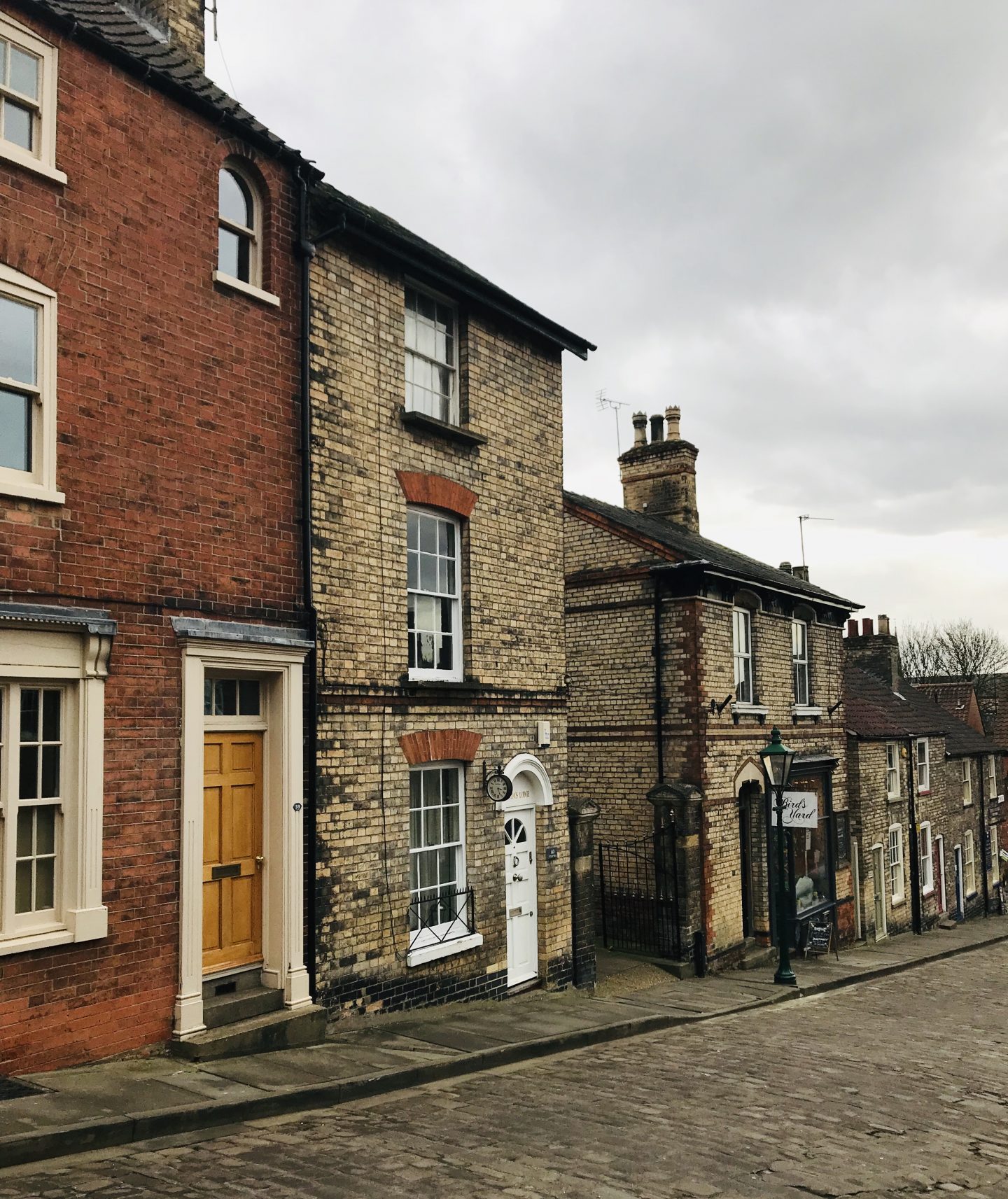 This is The Strait .. the gateway to Steep Hill. 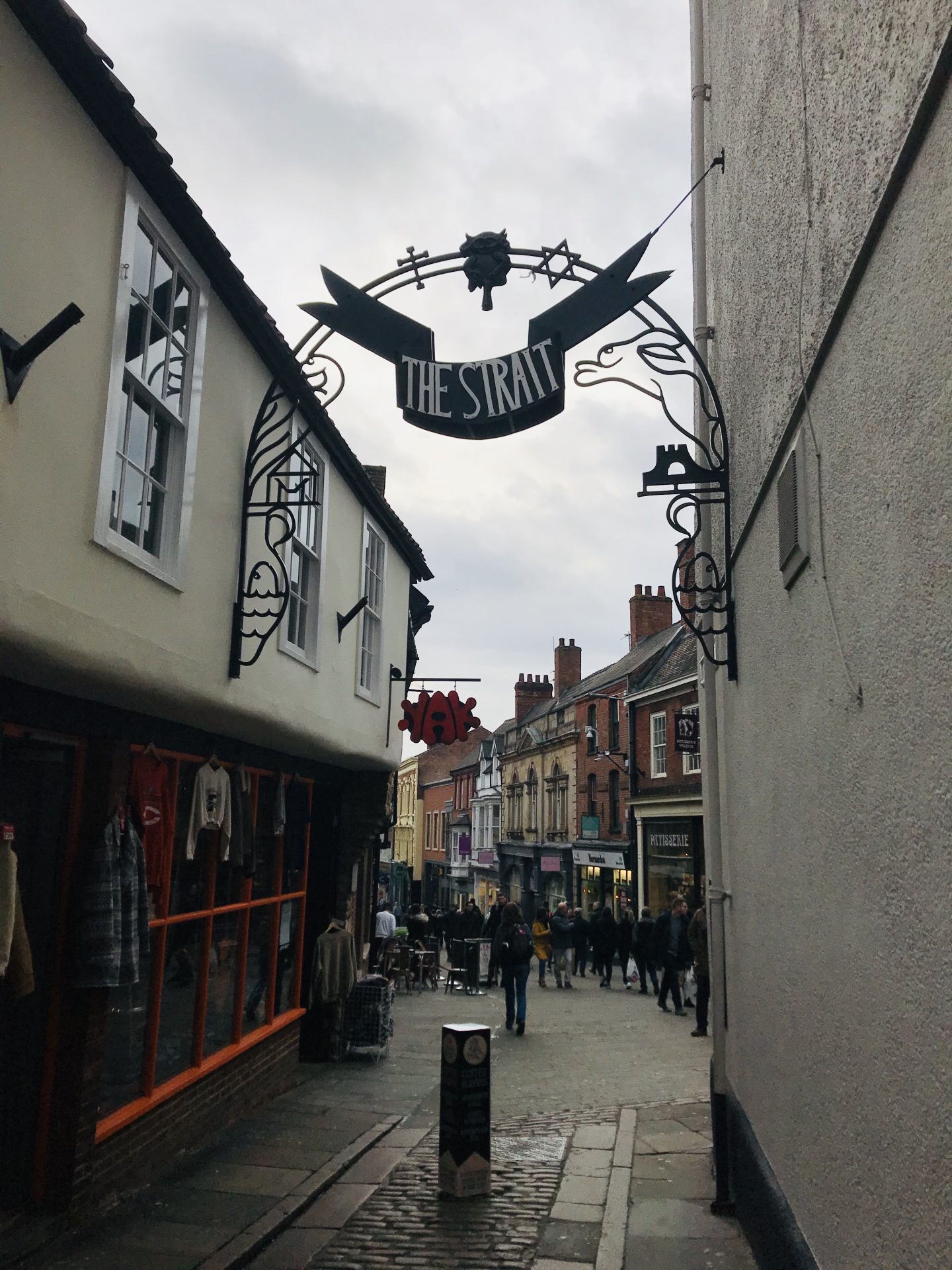 It is also the site of Jew’s House and Jew’s Court; a Grade I listed, 13th century building on Steep Hill, traditionally thought to be on the site of a Medieval synagogue. We’d spotted The Curiosity Shop at the bottom of The Strait on the way up and decided we would investigate on the way back down. It’s a gin bar. The perfect spot to quench our thirst after a busy couple of hours. 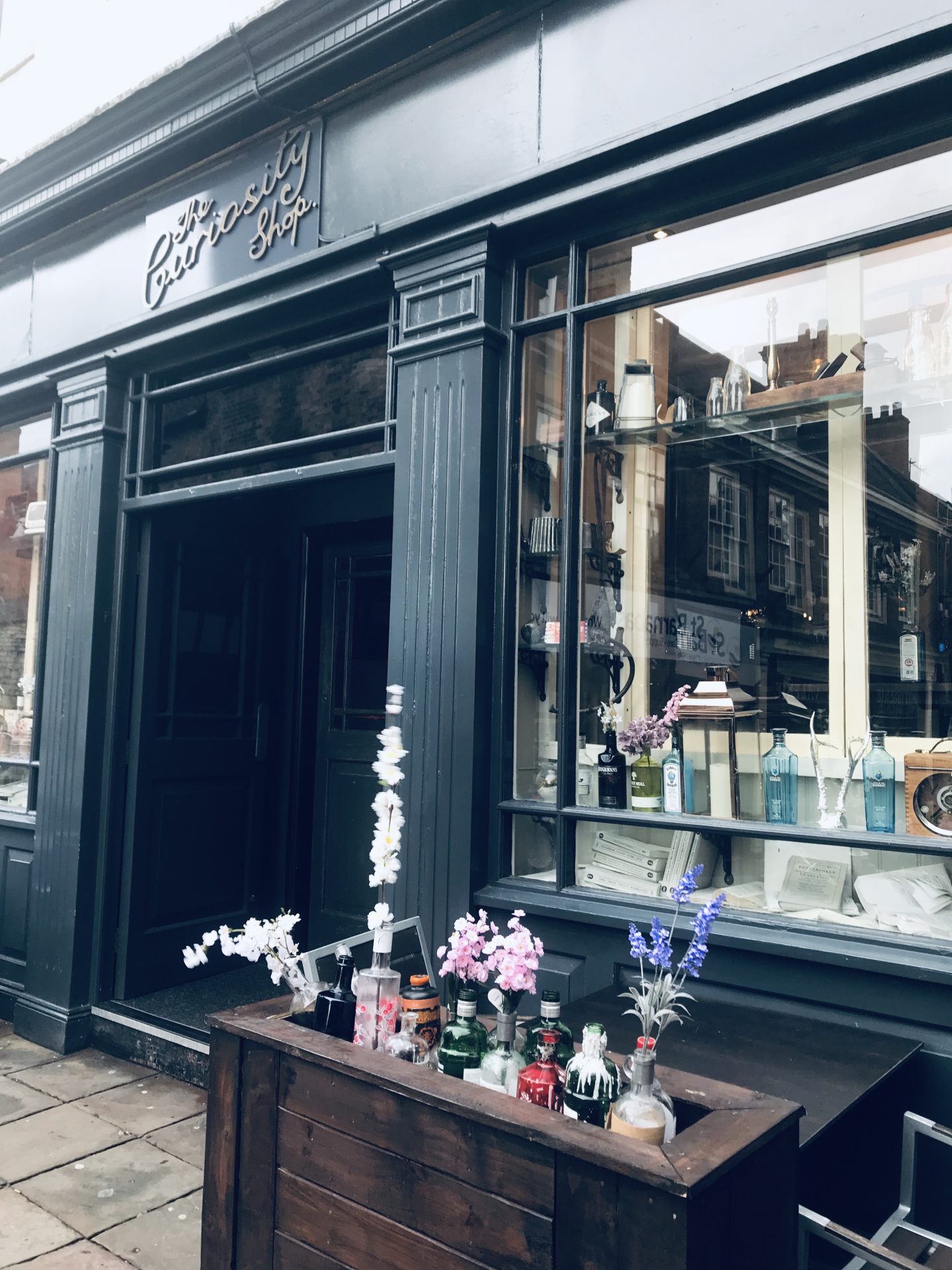 Lincoln has much in the way of shops and places to EAT like many other small cities. It’s its medieval history which is the jewel in its crown, though. The only thing that disappointed me, well, more saddened me was the amount of empty shops especially on Steep Hill. We went in the cutest of gift shops called Bird’s Yard which had a closing down sign in the window.

I asked  the assistant how could this be on such a tourist trail  .. the only way up to the cathedral? She couldn’t answer and said that they had worked hard to make it work but it just wasn’t to be. I bought a gift for my new great niece who arrived just before Christmas. I don’t think my purchase could save this quirky, little gift shop somehow. She told me they have a larger store in Sheffield that does well. Such a shame it wasn’t to be for Lincoln 🙁 We managed a coffee in Carluccio’s and a quick visit to Top Shop where I bought some {MORE} earrings in the sale and that was it .. our whistle stop tour of Lincoln. A very enjoyable day.

I’d definitely recommend a cathedral tour. We learned so much history from our friendly guide.  You’ll find out more information on the Lincoln Cathedral website.

Have You Been To Lincoln?

Let me know what you enjoyed if you have. If you haven’t visited Lincoln maybe I’ve encouraged you to add it to your travel wish list.