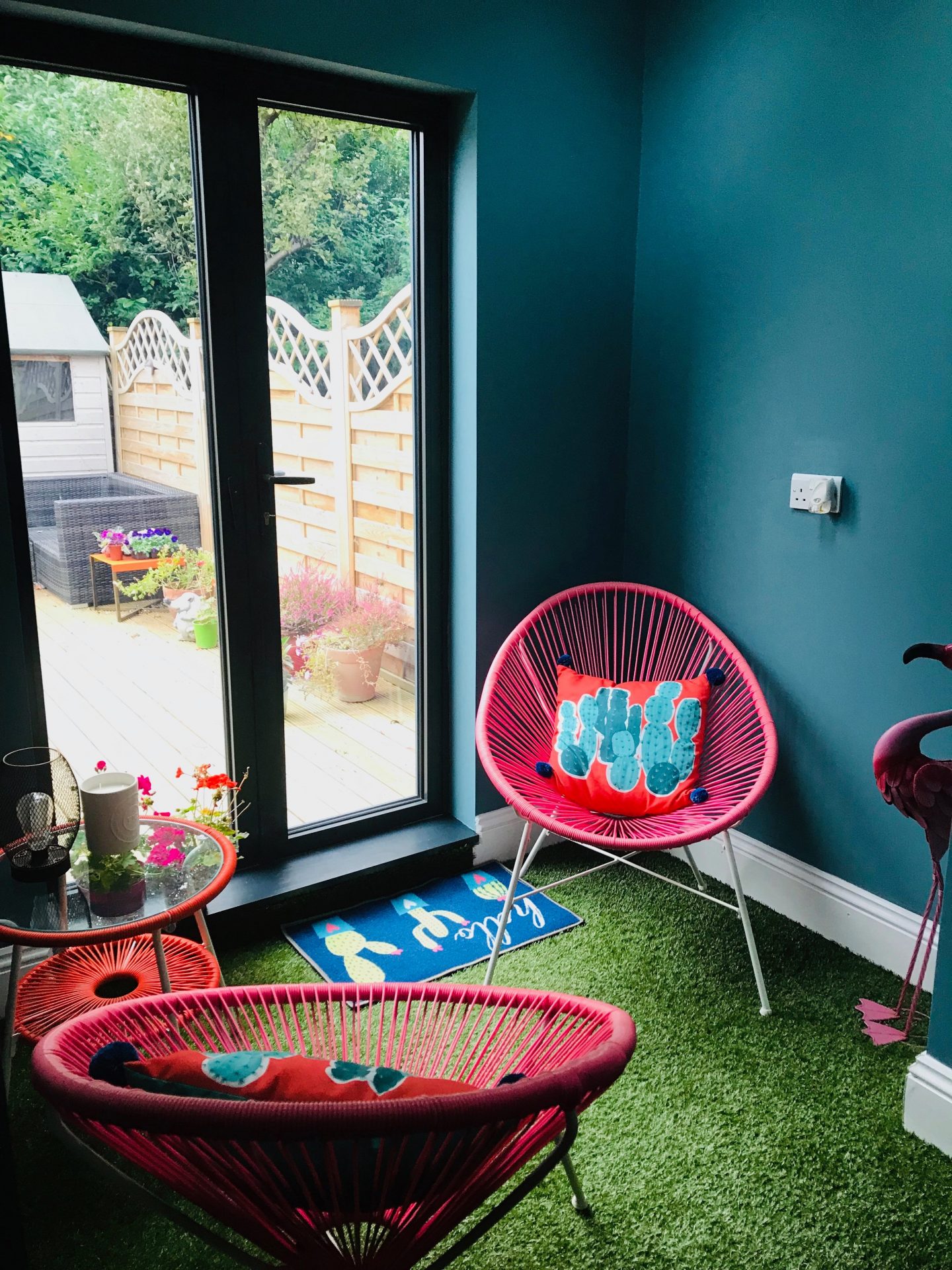 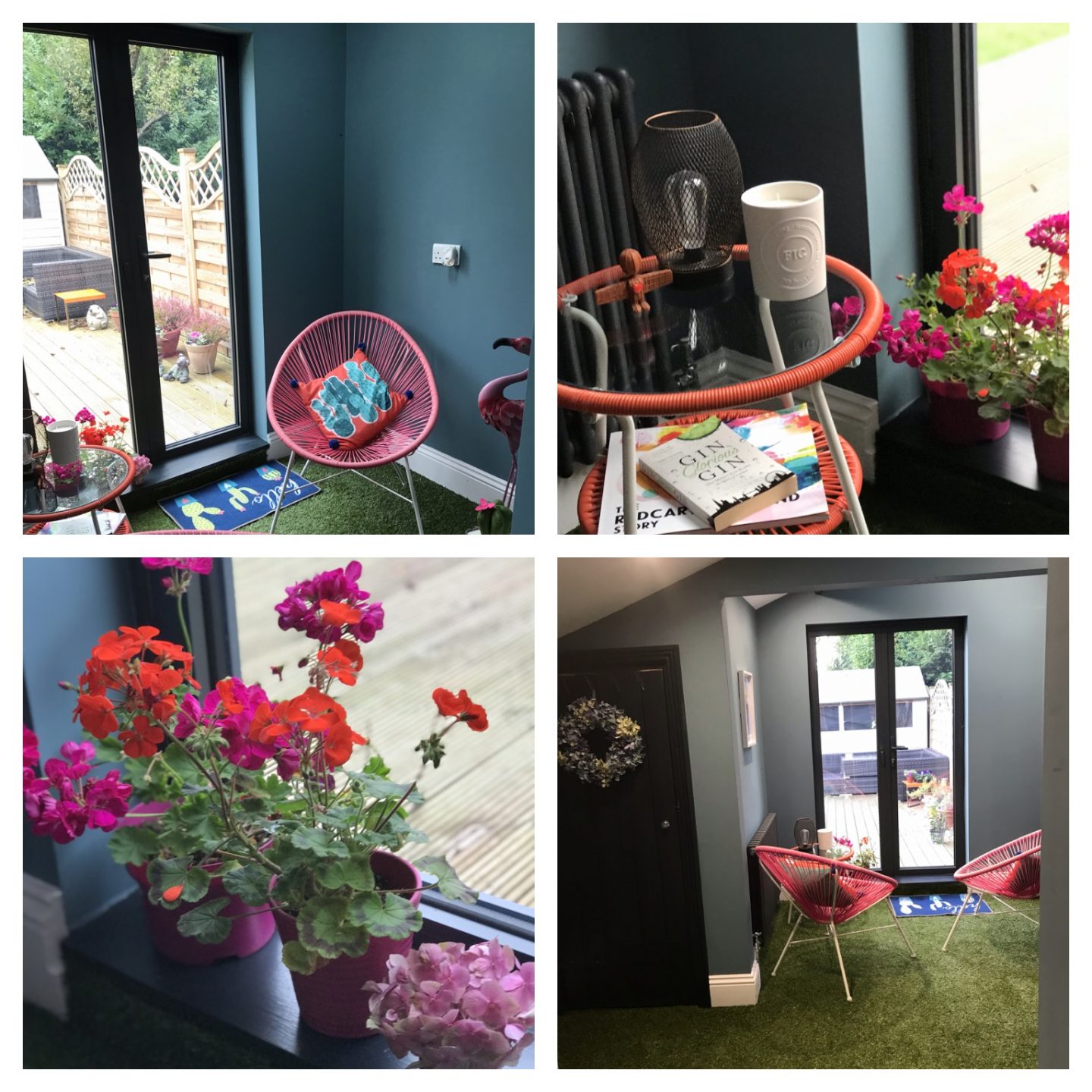 When I say we created a utility room in our Victorian semi I need to say that the room already existed. A better choice would be to replace the word ‘room’ with the phrase, ‘brick shell’.

It was basically a blank canvas. I described it very much as an out building but attached to the house. It needed a new roof which cost a couple of thousand pounds. We decided at this point to add some Velux windows to let some light into the room.

We re-established our new downstairs toilet as part of this project so all the things I mentioned previously about laying floors, draught-proofing, re-wiring, new electrics, putting walls up and plastering were all ‘project utility room’, too. We also needed to install a radiator in this room. It was previously a very cold, sad space and now it’s the warmest room in the house.

The only household items this room housed pre-project were the washing machine and our American style fridge freezer. They are still there but there is now so much room to play with.

Already there were some very nice dark grey, french doors that lead out onto the garden. Thank goodness for that. One expense we didn’t have to budget for.

For many months this was the scene that greeted us when we we opened the kitchen door. We’ve lived through building work before so it didn’t daunt us.

Here’s a few photos of the ongoing work … 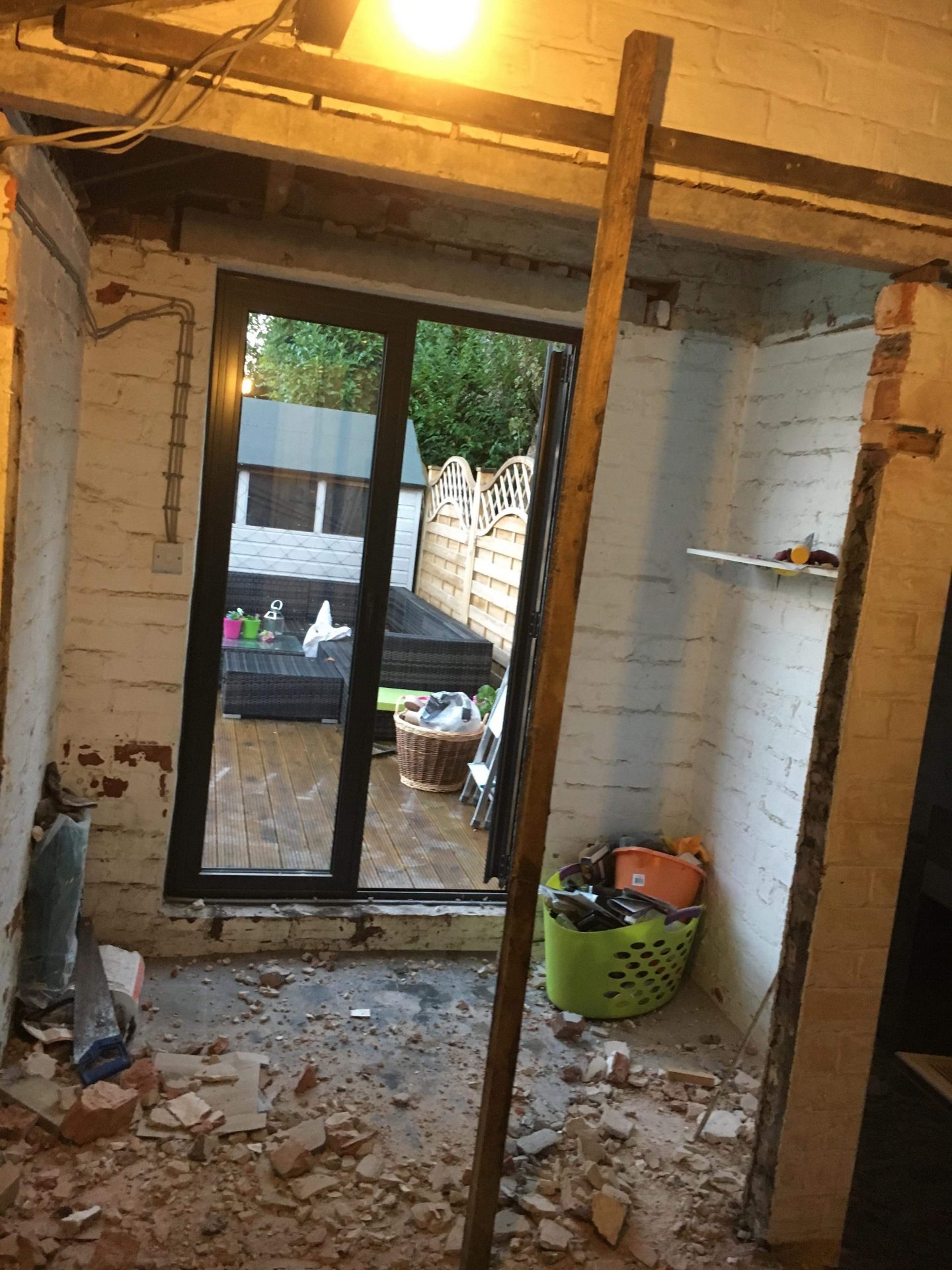 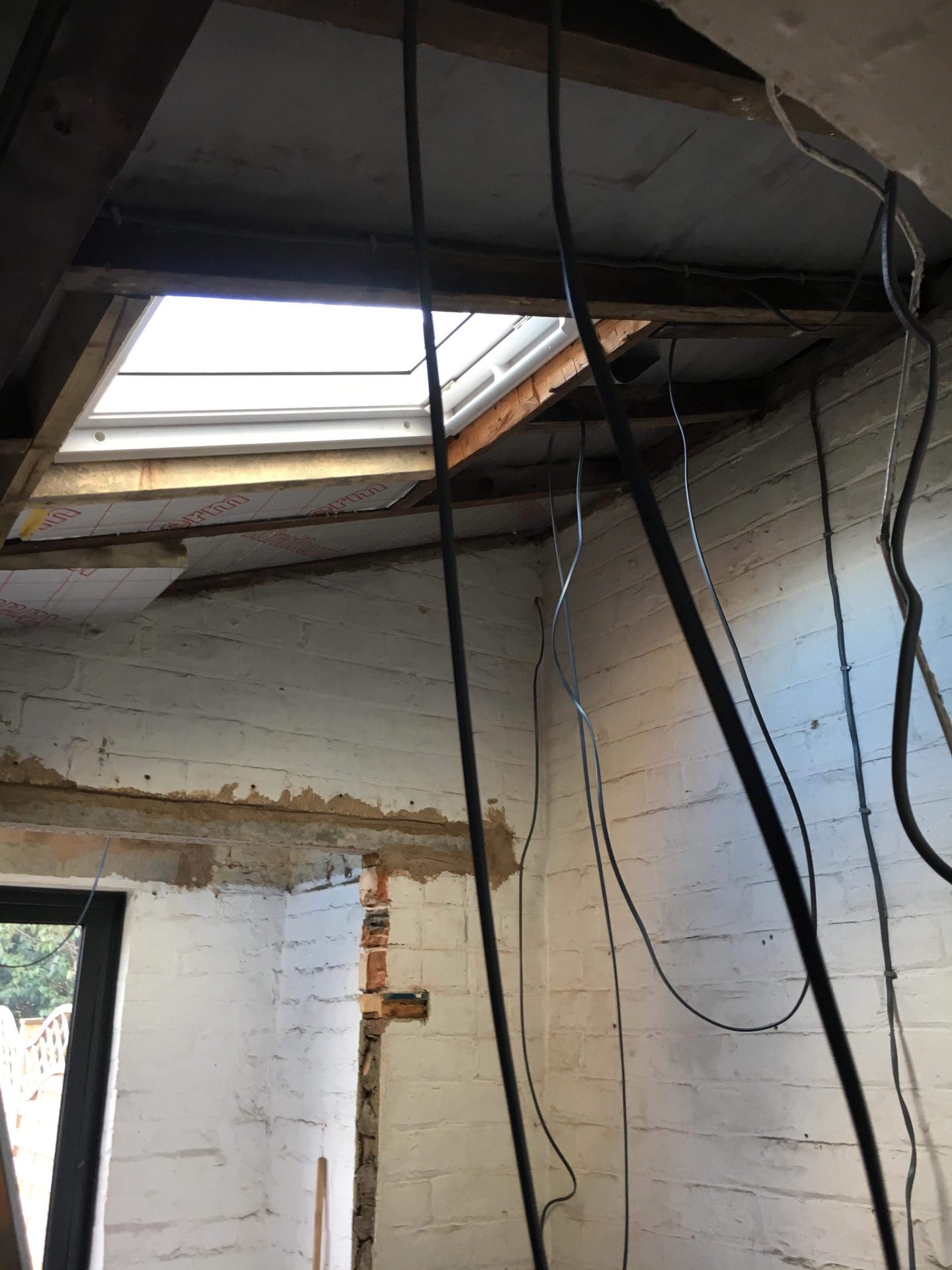 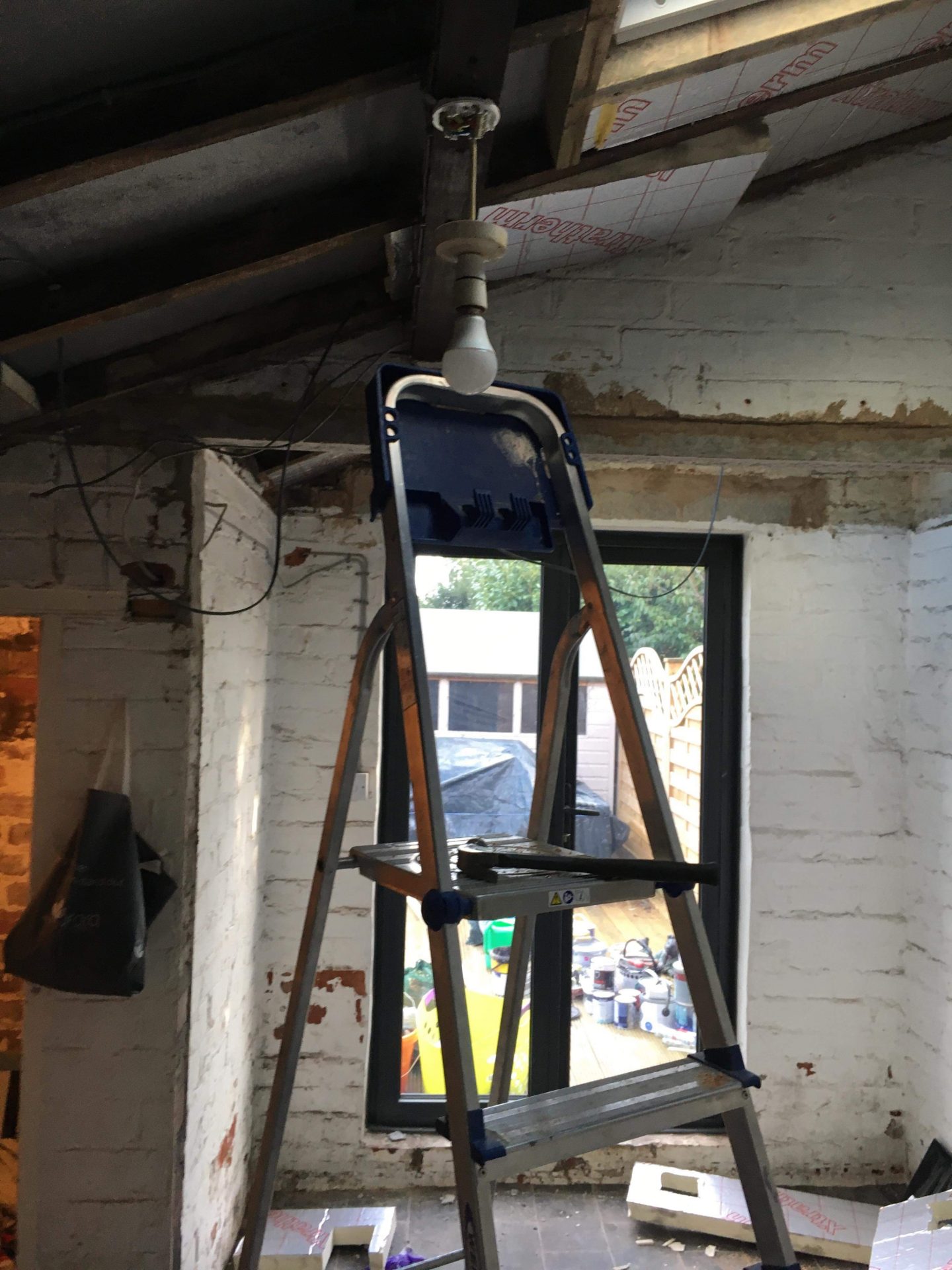 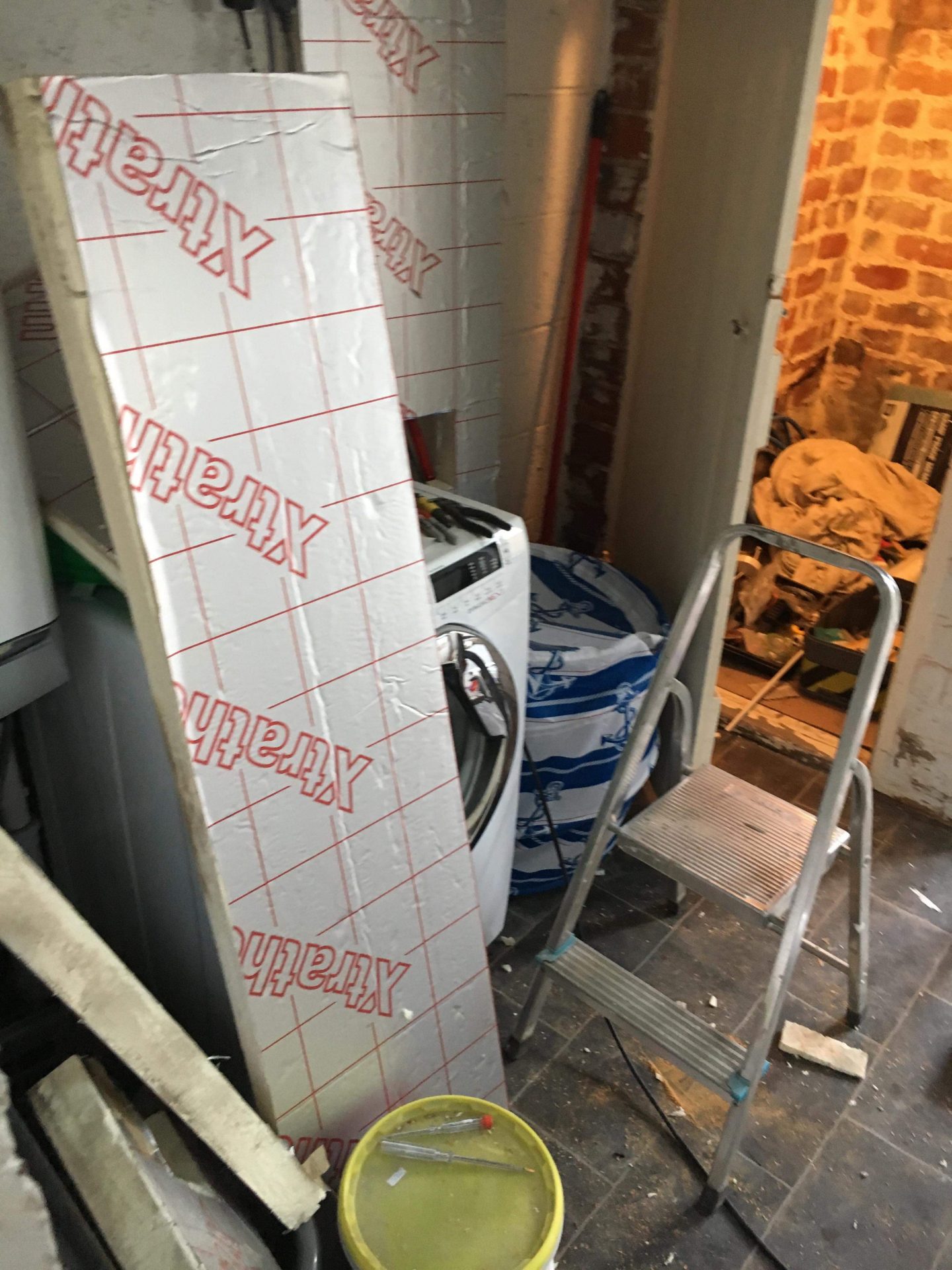 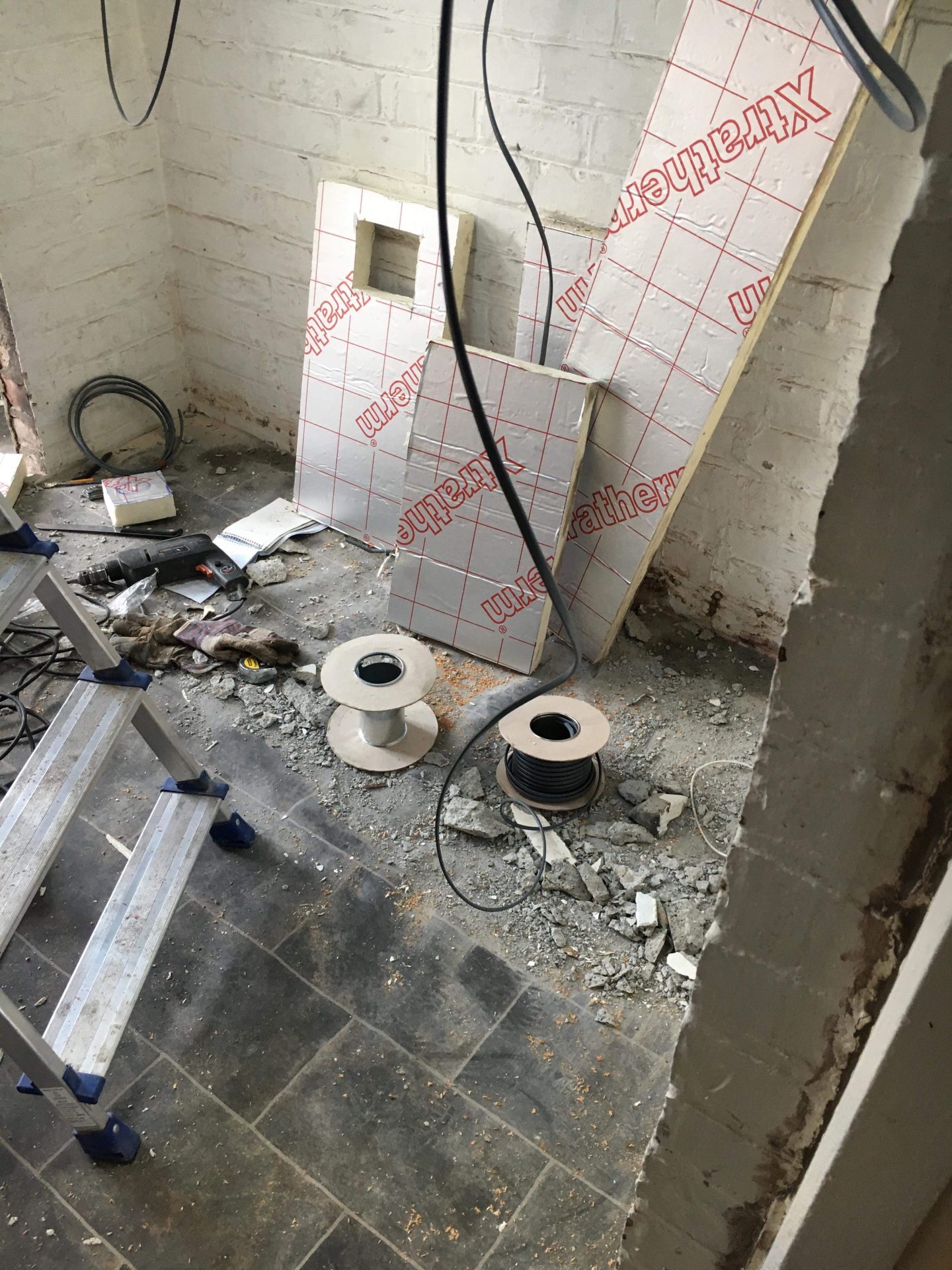 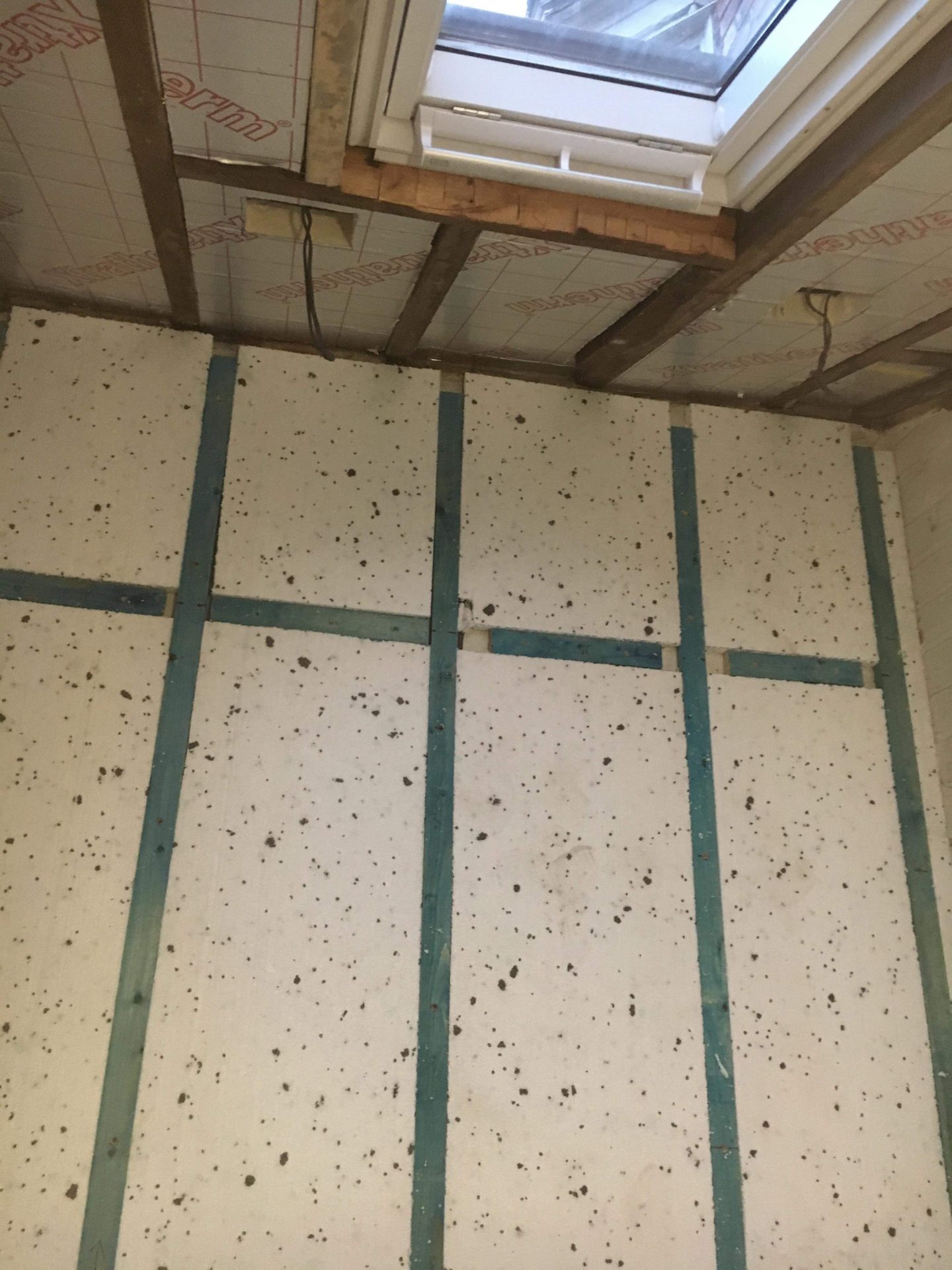 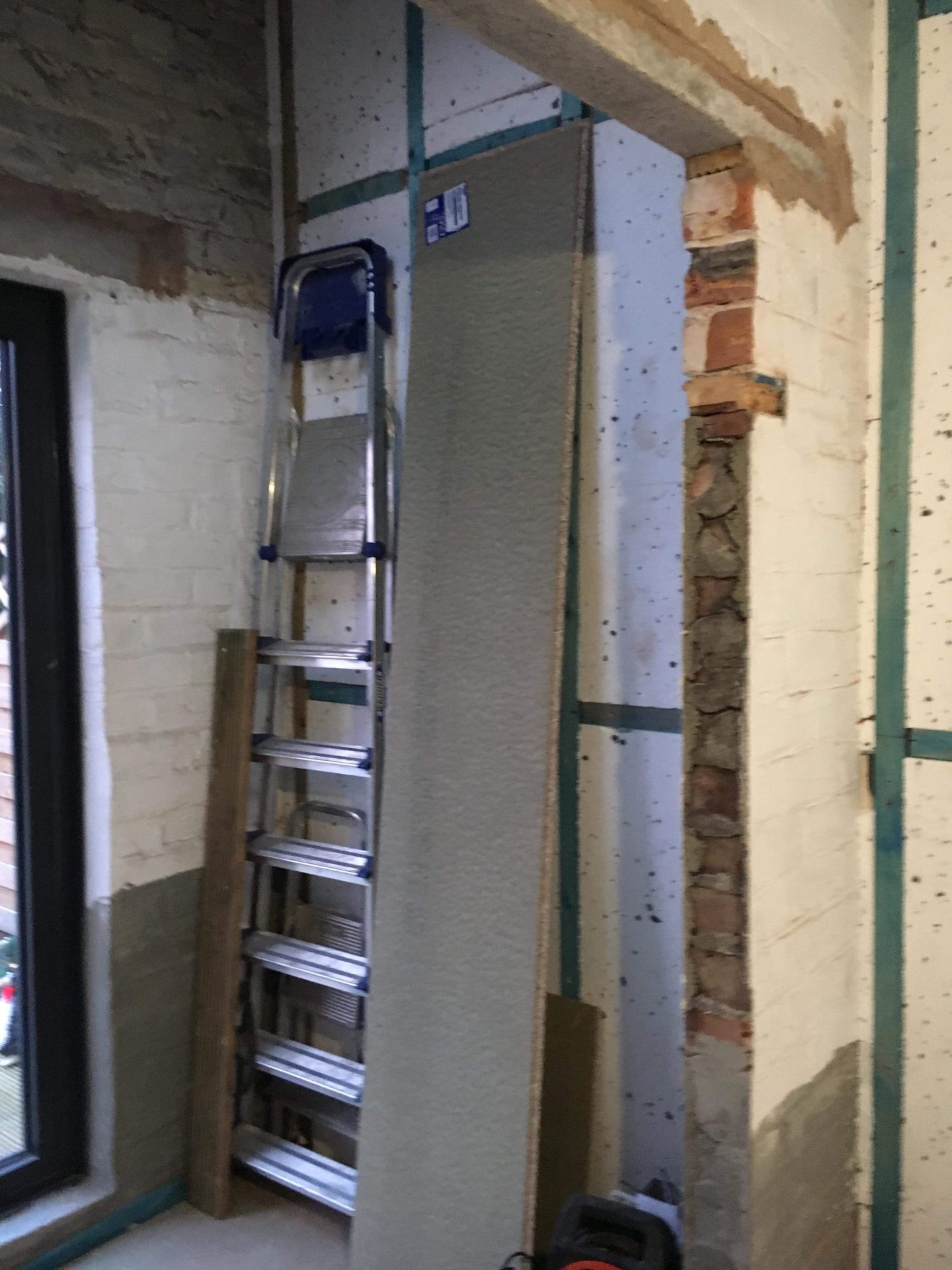 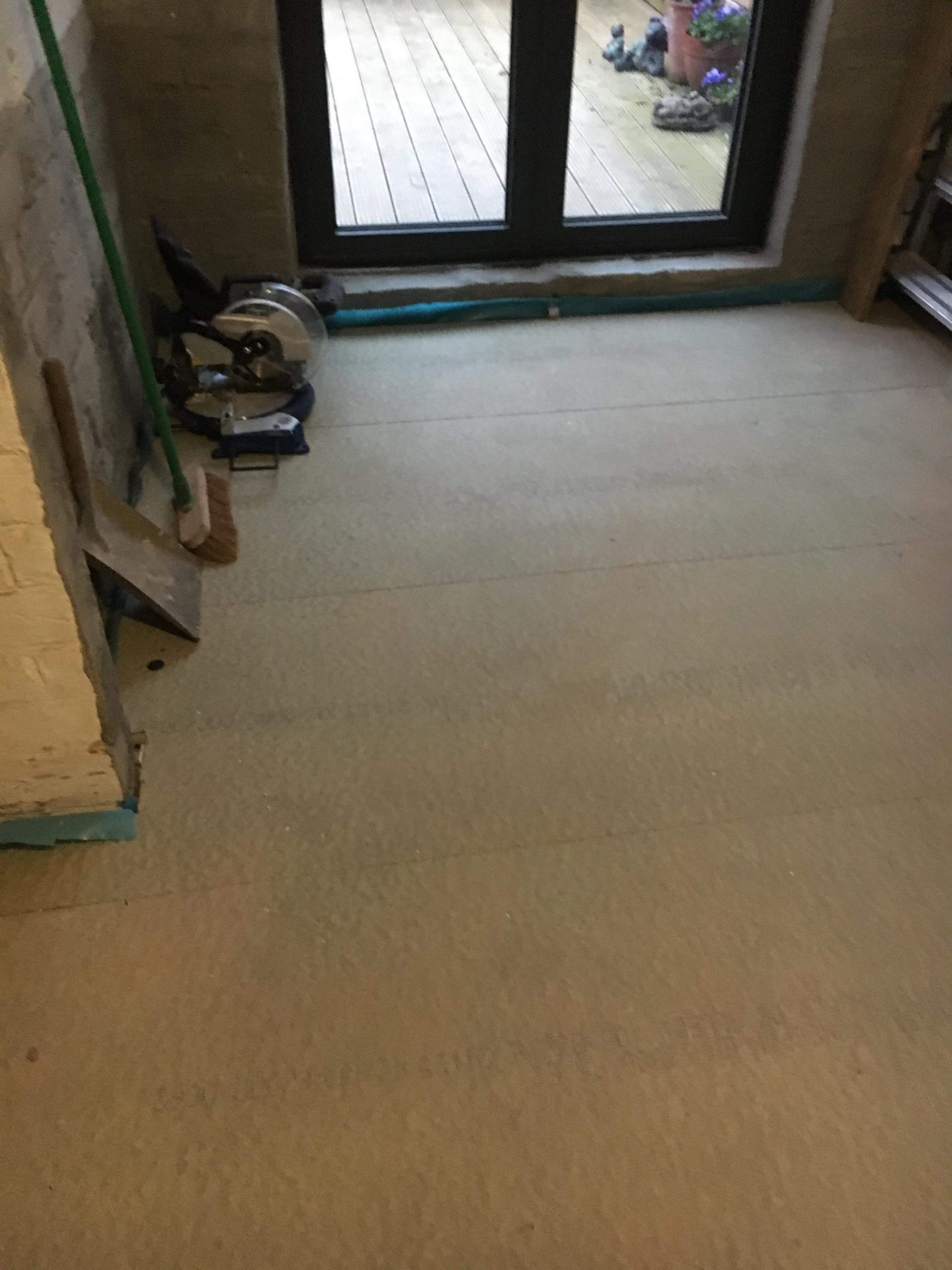 Mr B dropped a bit of a boo boo with the Velux windows, though. He forgot to mention to the roofing company that we wanted them dark grey on the inside as well as the outside to match the french doors. Whoops. We decided after a couple of sharp intakes of breath that in the grand scheme of things this wasn’t important.

We managed to get the room and toilet to bare basics by July. Just in time for the 21st birthday party in the garden for our youngest son.

The roof work was actually done in October 2017. It needed to be made water tight ahead of the winter months. The rest we started, I think, about February. Outside of when we needed tradesmen Mr B worked when he could at weekends and after work, week nights. It’s a labour of love, for sure.

We’ve ended up with a utility room size wise that is approximately 11′ x 10′. A pretty decent size especially now we are at the stage in our lives were it doesn’t resemble a Chinese laundry.

I decided to bring some of the outdoor furniture in for the winter. I’m not sure how permanent this will be but for now I think it’s a great use of the space. Oh and the artificial grass? Now there’s a story behind that.

The idea is that it’s temporary. The kitchen is probably going to be the final project of our renovations in a couple of years. At that point we want to level the kitchen floor to the same as this utility room. We would want the flooring then to be the same throughout. For this reason we didn’t want to spend a lot on flooring at this point.

It was only when we were at B&Q one Sunday afternoon that Mr B nonchalantly stated ‘ lets have some of that grass on the floor’.

I stopped in my tracks and exclaimed .. ‘what a good idea!’ He said he was joking. Don’t joke to a woman on a mission, hey?

Fast forward a couple of weeks from that very conversation and look here. We picked the mid range option from a local supplier and so far I can report it’s so easy to keep clean, no mess and totally hoover-able just like any carpet. It’s a keeper and a definitely a way to bring the outdoors in. 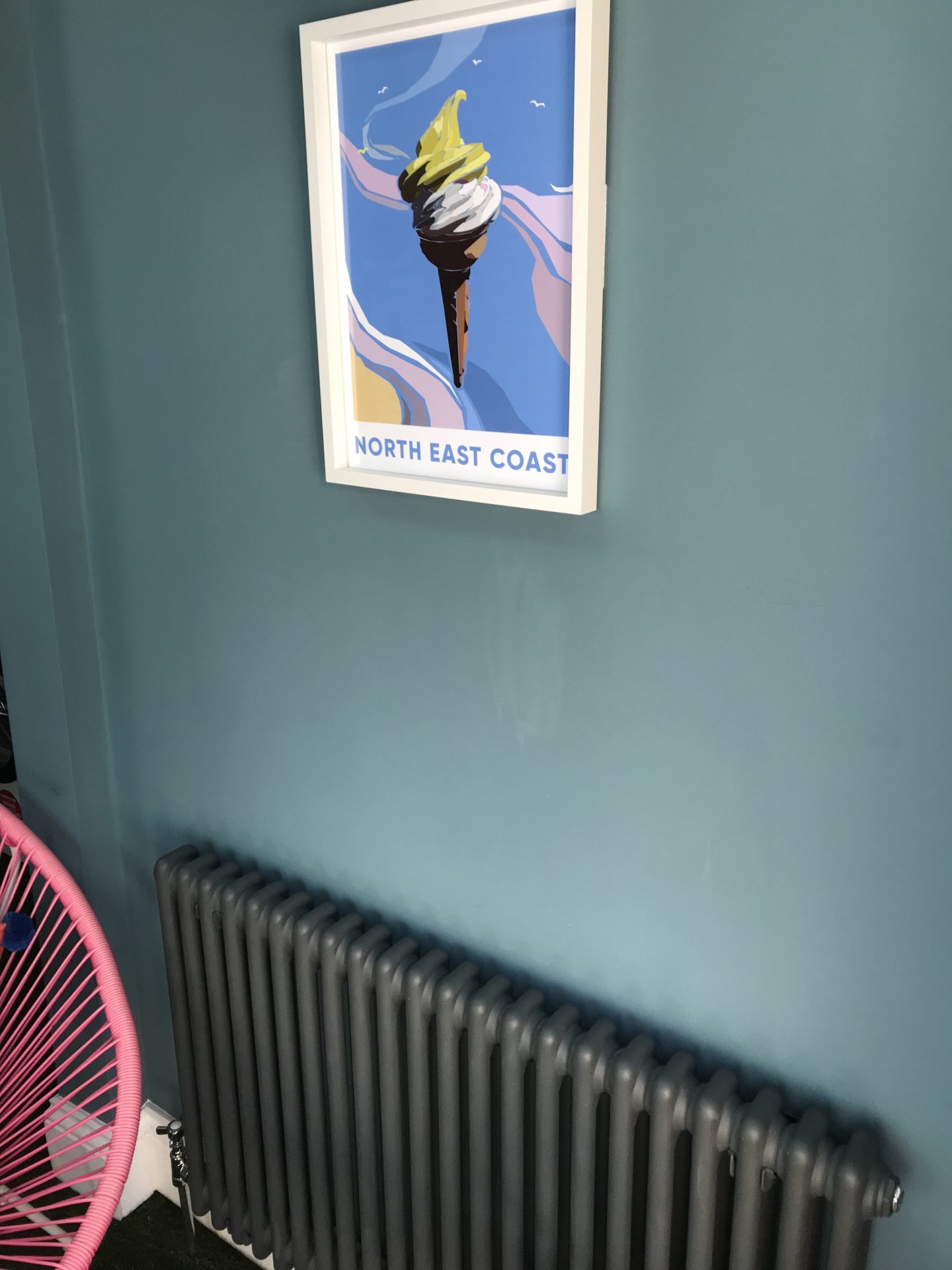 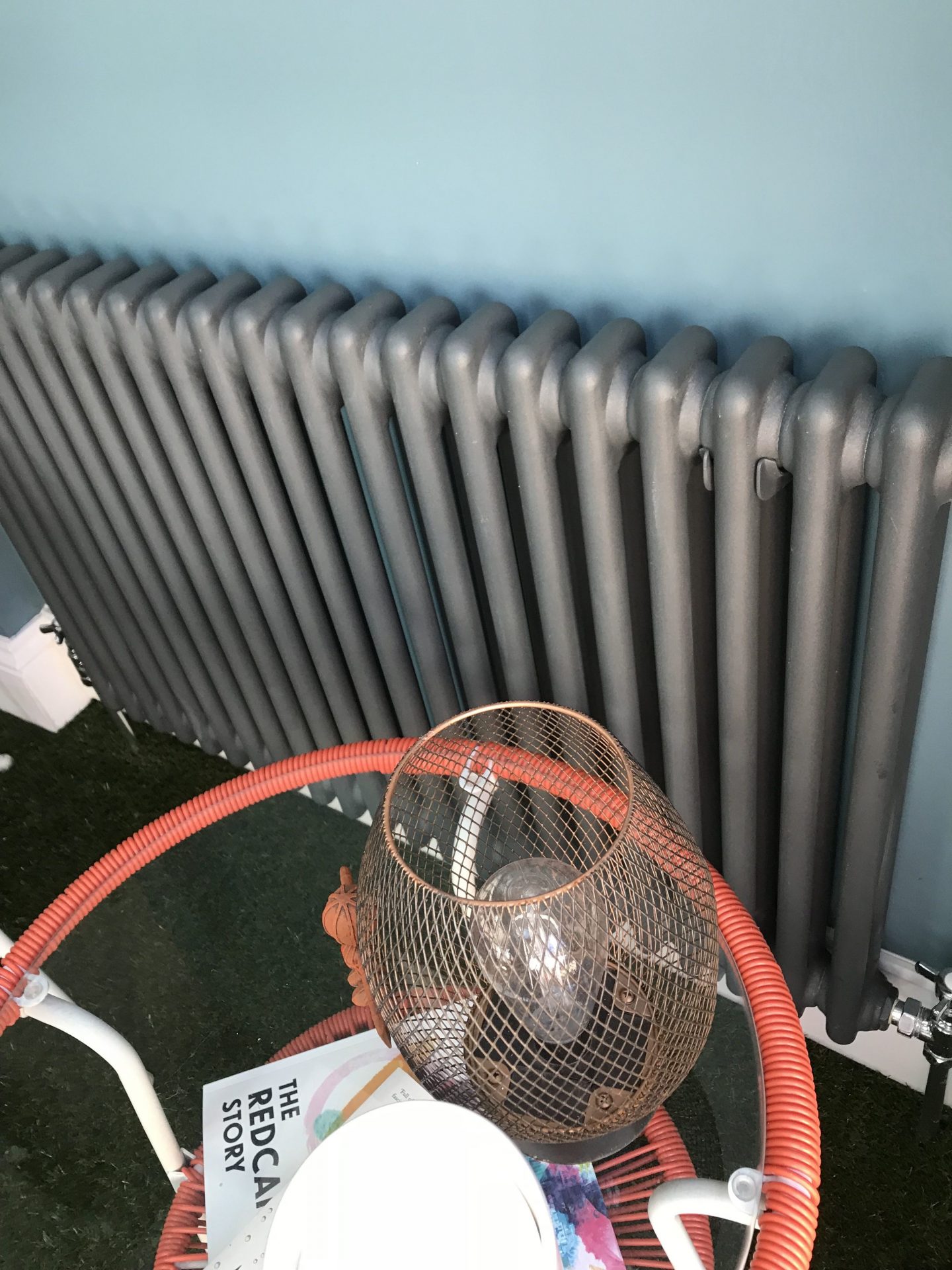 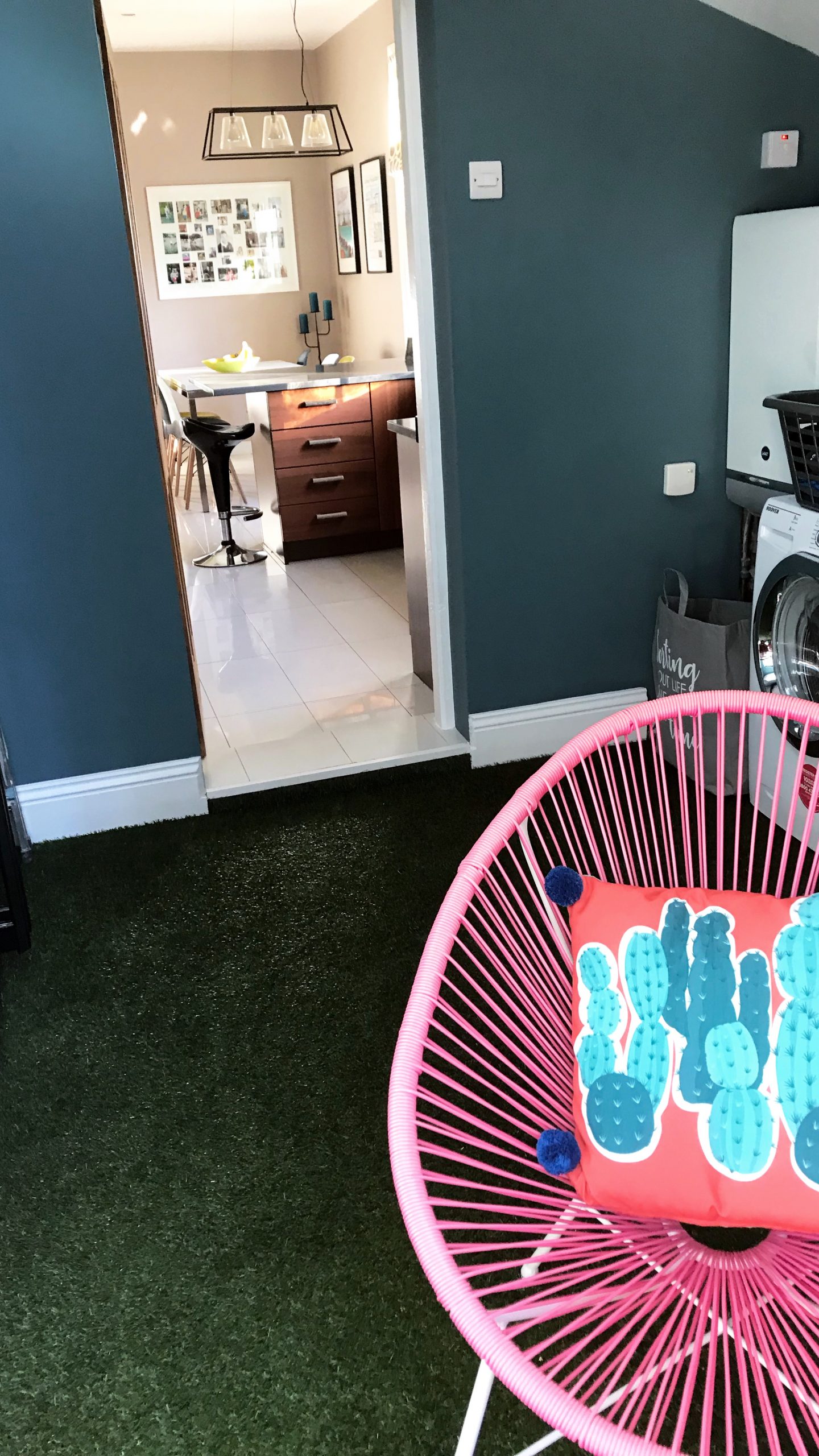 Chairs, table and cushions were from George.com in the summer

Paint – walls – Craig Rose Saxe Blue Chalky Emulsion from their 1829 vintage collection. We’ve actually used the same paint colour in the kitchen and the alcove walls in the snug. I like to have a tie in theme and we’ve become quite attached to this shade of blue. What I love mostly about it is the way it’s so many different shades depending on the light. Perfect I think for a period property.

Artificial grass was purchased from a local supplier but you can find similar at B&Q.

We’ve estimated the full project including this and the toilet but excluding the roof and Velux windows probably came in at around £2,000. This is down to the fact that Mr B did as much of the work as he could himself.

That’s it on the DIY front for 2018. The royal ‘we’ are having a rest. Apart from Mr B has just informed me that he thinks the boiler is on its last legs! Great news!

What do you think of our new utility room? I’m really happy with the transformation as I now have a little sanctuary to drink my morning coffee close to the garden when the weather is cold and rainy.