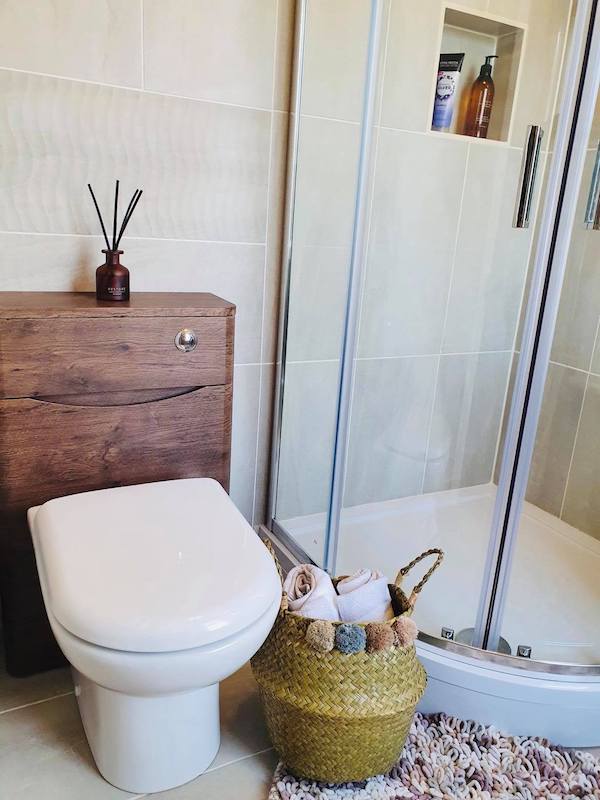 Ensuite Before & After Refurb Transformation

This post about  refurbing our small ensuite has been a long time coming. There’s a reason why I call our transformation journey a ‘slow Victorian reno’.  As I’m writing this I’ve suddenly realised that next week on 6th November is our 5 year anniversary of moving to our home.  I refer to our renovation journey as slow because the house was totally liveable when we moved in and so there was no urgency to rip things out. We’re also past that stage in our lives where everything has to be done yesterday. We used to wear ourselves out with house stuff when we were younger.

Note to younger self; ‘slow down!’

What we did do when we first moved in was refresh the parts of the house that we knew we’d spend a lot of time in. We also had to spend money on repairing the roof, replacing the boiler, sorting out a drainage and water flow problem… yada, yada, yada.

Our utility room creation and re-establishing a downstairs loo were BIG projects. You wouldn’t think it to looking at the size of these two rooms but there’s a lot of old pipes and intricacies that are involved in doing up old houses.

Our Victorian renovation is also slow because Mr Bed is a  DIY guru and likes to do as much as he can himself. He always leaves the important stuff to tradespeople like water and gas but anything else he likes to give it a go.

This ensuite is the second smallest room in the house. It has been squashed into the end of the landing at some point and then knocked through to access from the master bedroom. What is now the ensuite window was once the landing window. A great use of space but very small. Approximately 2m x 2m. So yes very small or as I prefer to call it – bijou.

Throughout the summer  of 2020 we began to gather quotes. Mr B had his third knee operation in 2019 and he’s not as spritely as he once was and so thought he’d finally pass on his DIY crown. Renovation and DIY involve a lot of kneeling down.

There’s something about lockdown 2020 that saw trades people become like rocking horse poo and in many cases hike up their prices.

We were quoted 6k for this job. Let me say it again …

For a tiny errmmm ‘bijou’ ensuite. Mr B decided it needed to be an inside job again.

Well, not strictly before. This is actually the picture from Rightmove. 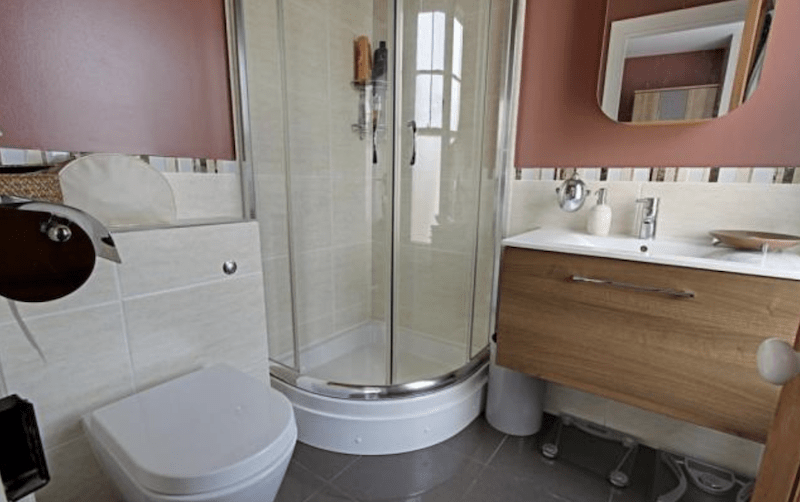 The previous owners took the mirror with them but everything else was as you can see. We actually freshened it up with a lick of pale grey emulsion but that’s how it stayed until this Summer.

It’s been a slow old process. Ordering large items online all had a very long lead time presumably because of global lockdowns so it took months for everything to arrive so that ‘we’ … ‘the royal we’ ? could make a start.

I always think knocking things about and ripping things out make a room look so sad, don’t they? 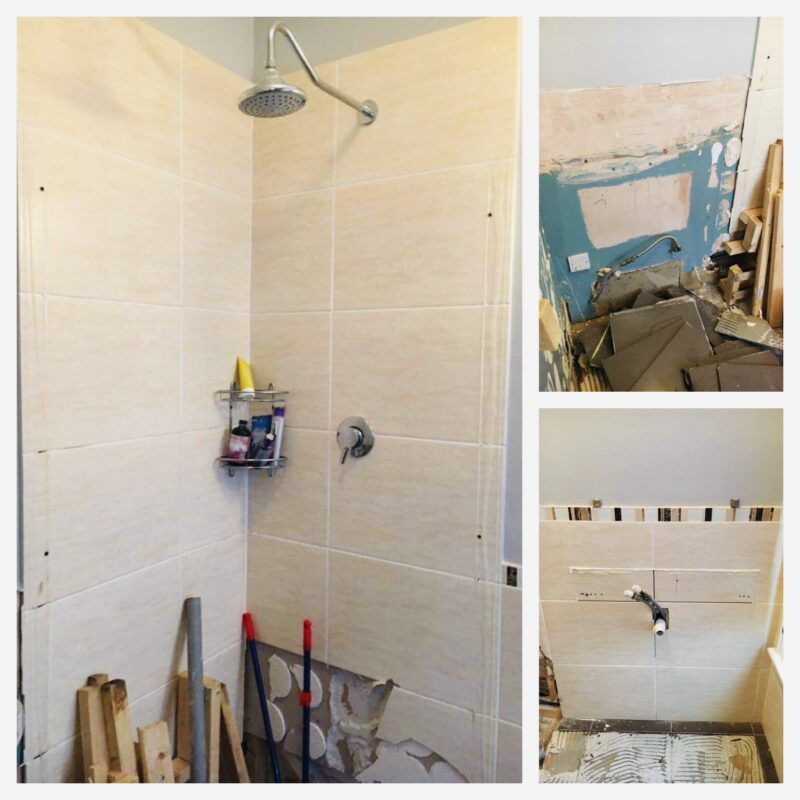 I took my inspiration from this room from an image on the Topps Tiles website as I made my mind up about the tiles from the minute I saw them. 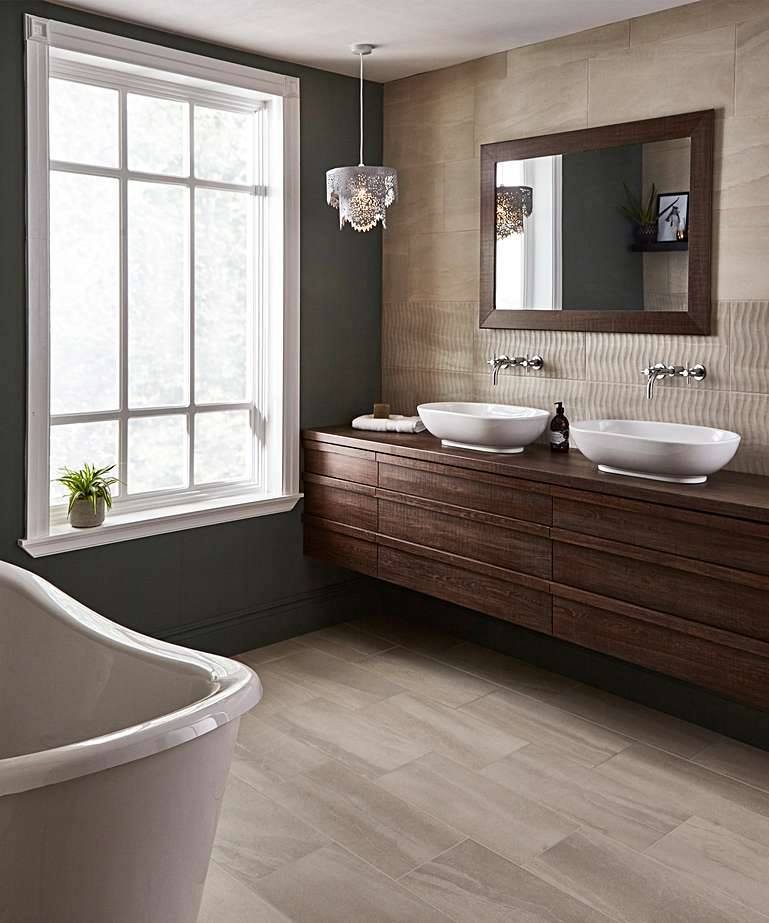 I also said I wanted one of those cubby holes in the wall in the shower for storing shampoo and shower gel. This caused a sharp intake of breath as he said ‘ Sharon, you know I have to bring the wall out to do that in what is already a very small space?’ ‘ Yes! I know!’

Here’s the tiles going in. We decided to fully tile the walls and floor. 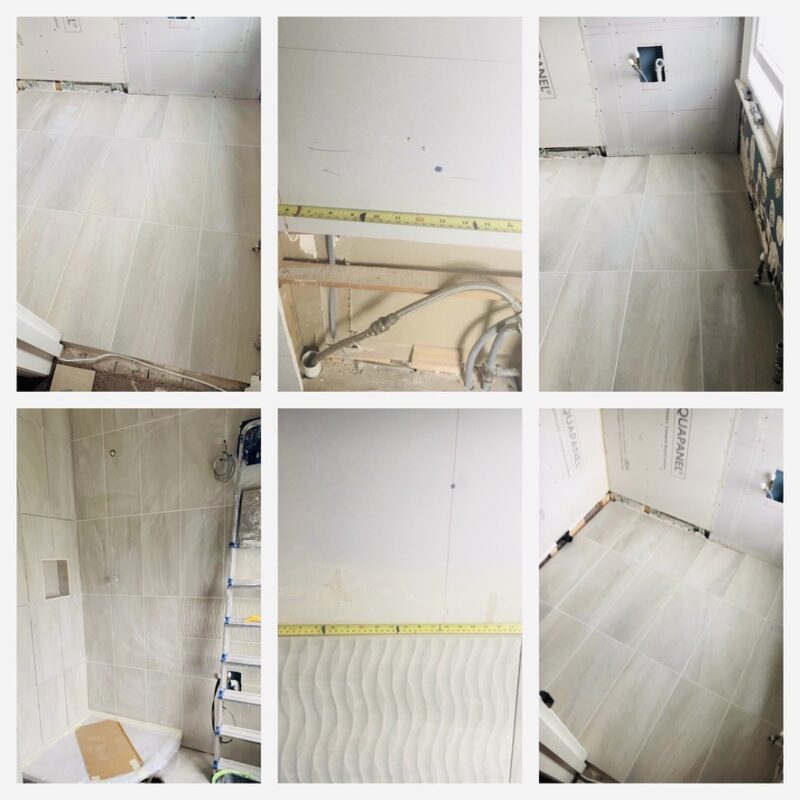 and there’s my cubby hole ? We also created a border with the wave tiles in the range as per the inspiration to give some tone and break up the colour. We put the wave tiles across the back of the toilet and across the sink. In fact, right around the  room. Oh yes that massive room! Apart from inside the shower enclosure itself.

Here’s a close up of the wave effect tiles. 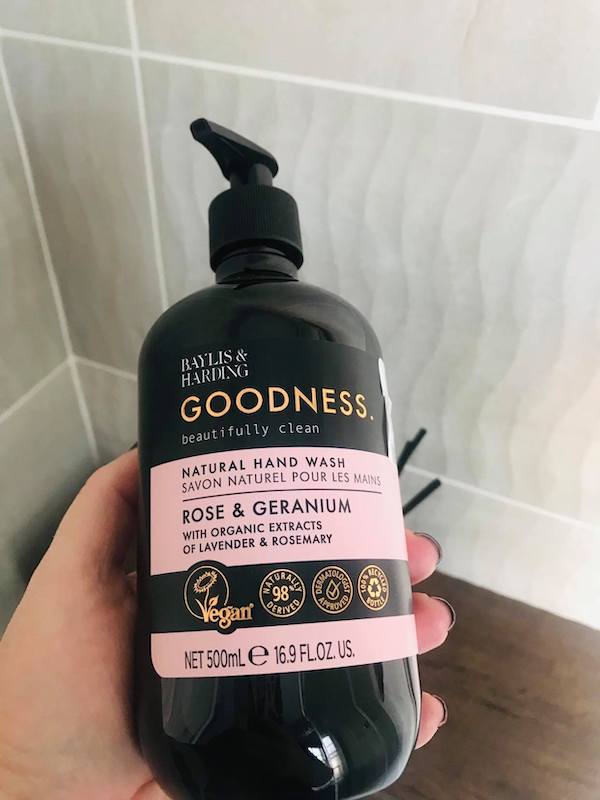 My phone isn’t great capturing this as the light isn’t wonderful in these old houses. Incoming news …. my phone gets upgraded this month which will help a lot!

The style and shape of the shower we couldn’t really change. But what has made the most amazing difference is this shower is a full 10 centimetres bigger in circumference than the old one. From 800mm to 900mm. Size is everything!!

We substituted a smaller sink so we could have extra space for a shower size upgrade. What I hated about the old shower was all the crevices for cleaning. It was a nightmare. These doors have quick release wheels on them so you literally can unclip the doors for access to clean. Perfect for a clean freak like me. Oh and the glass is anti streak. I won’t say it cleans itself but it seems as near as dammit. I just give it a blast with Method glass cleaner once a week. 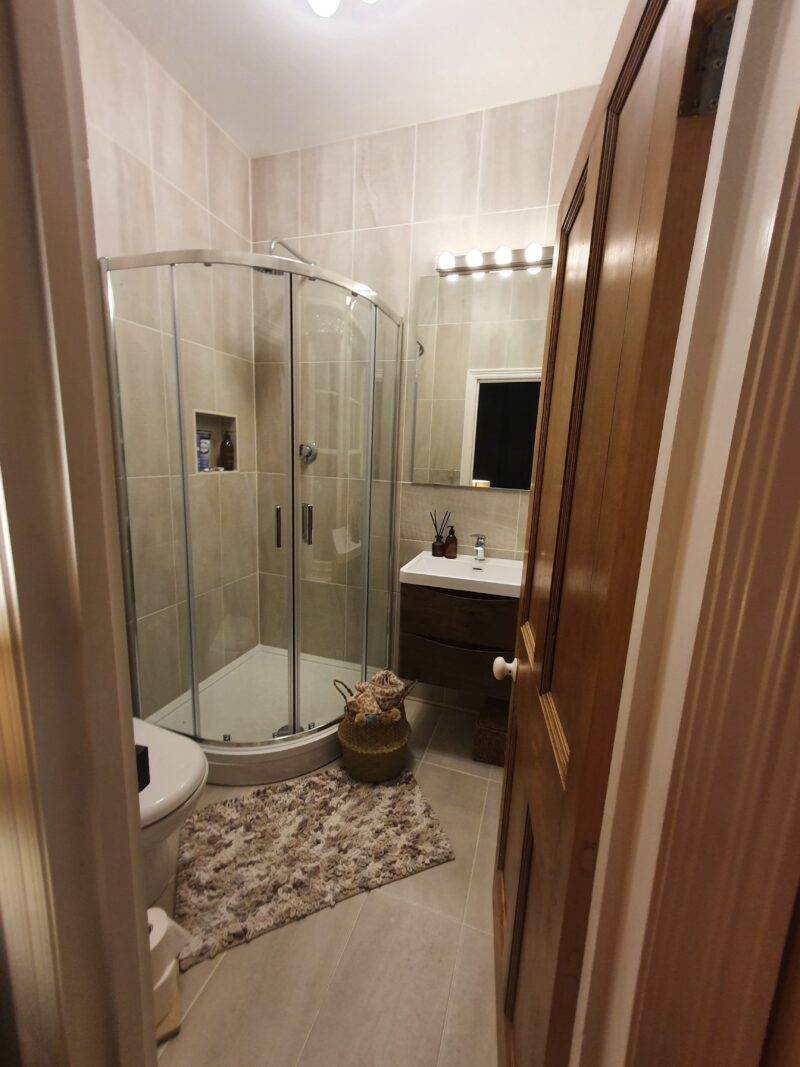 The other job that was a challenge was the toilet. Because we’d taken that extra space up with the shower we didn’t have as much jiggle room for it. It’s also a macerator toilet in this room.

Because of the location of our ensuite and the fact that a Victorian house didn’t have a shower or any pipes for anything water related in this part of the house it creates a bit of a logistics nightmare for renovations. Especially when you need said contents of toilet to head on out to the main waste supply. You keeping up here? ?

That’s when a macerator is required. Even better, here’s good ol’ Wiki with it’s full intel on macerator toilets. A new heated towel rail could still only go behind the door but we doubled the height this time. 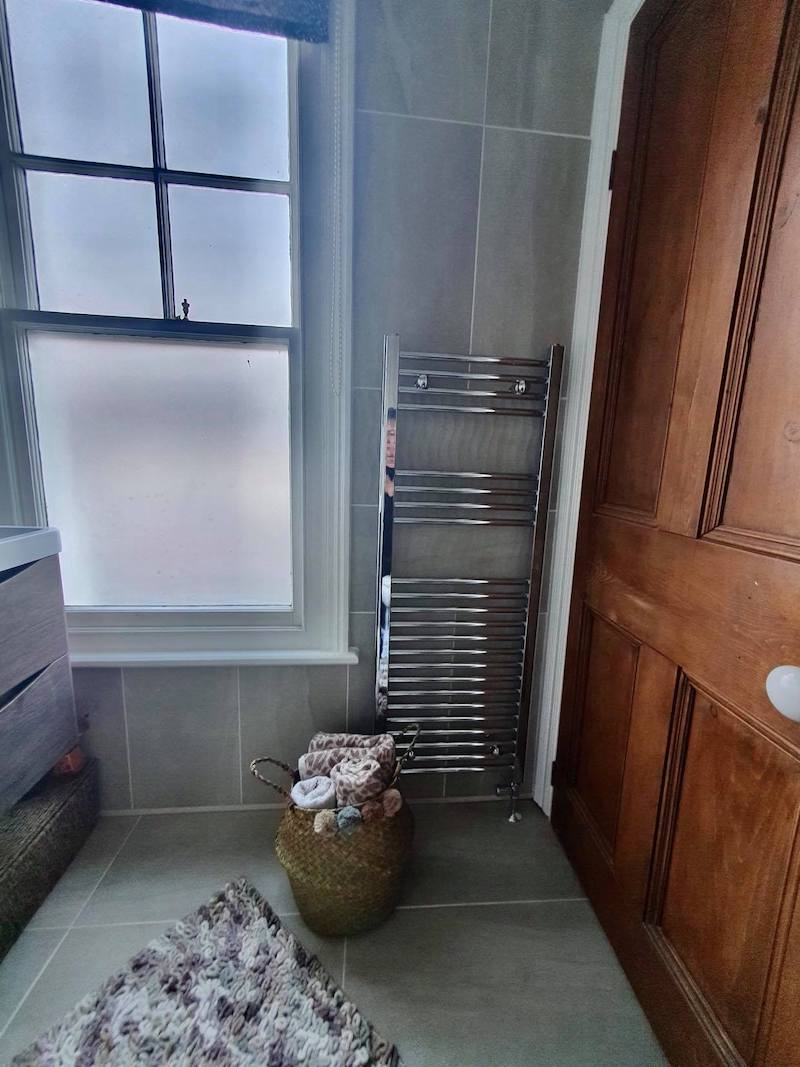 Durba Stone Tiles from Topps Tiles  with all the bits and bobs like tile cutter, trim and fixing and finishings we estimate the spend was around £1000.

We bought the shower enclosure, tray and kit, tray waste and shower head all from Victorian Plumbing at a cost of £365.

The sink came from Drench, the Harbour Clarity range – £250

Back to wall unit also from Drench for the toilet – £130

Screwfix heated towel rail  – we paid £70 as was on offer at time of purchase.

The spotlights are Ikea  – £40 and the mirror we had cut to size at a local glass merchant.

M&S towels – leopard print.The striped ones don’t appear to be online anymore but where bought at same time.

No new windrow dressing yet as we are booked in to have new windows fitted in early 2021 so making do for now.

All in all the overall spend with some other unaccounted bits and pieces comes in at £2,400. I think you’ll agree that that is a massive saving plus another satisfactory accomplishment for Mr B on our slow Victorian renovation. He did good … very good.

Next up is the master bedroom. We’re on with that. The fitted wardrobes went in in September. We’ve had floorboards up .. all sorts going on. We knew this was never going to be as straightforward as a bit of painting and decorating. All major stuff and big ticket items again. Hopefully, it will be completed by Christmas. There’s no rush at all. Like I said earlier, I’ve become patient and less bothered as I’ve got older.

We’re also ripping out the main bathroom next year. Mr B has already informed though that he defintely has no plans to do that project himself.

We’ve also just heard last night the UK is going into full lockdown mode again in a few days time until December 2nd. That will no doubt put the kibosh on lots of things but as long as everyone is safe that’s all that’s important.

Lots of love and stay safe

Sometimes my posts feature affiliate links. They do not cost you anything at all. I will receive a few pence literally if you purchase by clinking the links in my post.